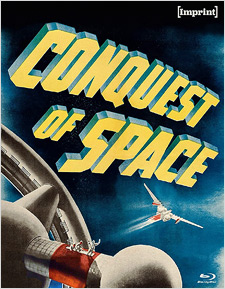 [Editor’s Note: This is an Australian import Blu-ray release but is coded for ALL REGIONS, so it will work on US Blu-ray players.]

Produced by the great George Pal and based on Willy Ley’s 1950 non-fiction book of the same name, Byron Haskin’s Conquest of Space tells the story of the first ever manned mission to Mars. Led by Space Corps General Samuel Merritt (Walter Brooke) and his son, Captain Barney Merritt (Eric Fleming), the mission is risky from the start, but is deemed vital due to humanity’s voracious need for raw materials which are running out on Earth. Setting out from “The Wheel,” a large military space station in orbit that rotates to generate gravity, the mission features an international crew that braves the many dangers of deep space, yet discovers that it’s the all-too-familiar dangers humanity poses to itself that are the hardest to overcome.

Haskin is, of course, known for directing such 50s genre classics as The War of the Worlds, Robinson Crusoe on Mars, From the Earth to the Moon, and Disney’s Treasure Island, and he does a capable job here. The film scientific accuracy was remarkable for its day, featuring the input of not only Ley (a prolific science writer) and artist Chesley Bonestell (considered to be the “Father of Modern Space Art”), but also early spacecraft concepts by Wernher von Braun (the ex-Nazi rocket scientist turned NASA chief engineer, who designed the Saturn V Moon rocket). Pre-dating Star Trek by a decade, it even depicts a multi-ethnic crew that includes Black and Japanese astronauts (though the latter was actually played by Chinese actor Benson Fong).

But the film’s screenplay (credited to James O’Hanlon but in fact touched by multiple writers), is properly terrible, saddled with such sparkling dialogue as, “Set your gyros for Mars!” The film also offers one melodramatic trope and sci-fi cliché after another (including space madness, meals-in-a-pill, and crewmen going ga-ga over women “back home,” among them Rosemary Clooney in an uncredited cameo). And the acting is a mixed bag at best, including a buffoonish comic performance by Phil Foster (think Ralph Kramden as an astronaut) and a blustery turn by Mickey Shaugnessy (channeling every bad Irish cop/drill sergeant character in cinema history). And yet, there are moments where the film dares to ask profound questions about humanity’s destiny in space. It’s a puzzling combination.

Imprint’s Blu-ray features the film in 1080p HD, presented in its original 1.85:1 “flat” aspect ratio. As was the case with Marooned (reviewed here), this appears to be a recent 2K film scan done by Paramount, though one with little in the way of digital clean-up. You will occasionally see dust and dirt in the image, along with the odd scratch or nick. Still, this is a solid HD image on the whole. Contrast is pleasing, with deep blacks. Colors are vibrant (as one would expect from three-strip Technicolor), with pleasing image detail and medium (yet natural) film grain throughout.

Humphreys’ commentary is filled with interesting trivia and context, while Forshaw and Newman offer more of a conversational analysis of the film and its place in science fiction cinema at large. Both are entertaining and worth your time. There’s also a pair of great documentary featurettes by Daniel Griffith’s Ballyhoo Motion Pictures on Haskin’s directorial career and this production in particular. And both the Amaray case and its slipcase (available with the first 2,000 copies only) use the film’s original poster art, which is lovely.

Conquest of Space is a uniquely uneven sci-fi tale with as much to appreciate as to be frustrated by. Yet the film seldom gets the attention it deserves, and Imprint has created a lovely batch of all-new extras, making its first appearance on Blu-ray well worth a look for fans of spaceflight and 50s B-grade cinema alike.