All right, I’ve just spent all week reviewing every single one of the new Star Trek 4K Ultra HD releases, save for the new 6-Movie Collection. So you can now read my thoughts on: The 3-disc Star Trek: The Motion Picture – Director’s Edition: The Complete Adventure, the 2-disc wide release of the Star Trek: The Motion Picture – Director’s Edition, and the 2-disc wide releases of Star Trek II: The Wrath of Khan, Star Trek III: The Search for Spock, Star Trek IV: The Voyage Home, Star Trek V: The Final Frontier, and Star Trek VI: The Undiscovered Country, all in 4K Ultra HD from Paramount.

For those who might be wondering, the new 6-Movie Collection includes everything except for the Special Longer Version of Star Trek: The Motion Picture which is exclusive to the Complete Adventure box set. So adjust your purchase plans accordingly. All the details on the other SKUs are in the reviews linked above. I hope you enjoy them all!

Now then... as you can see by the image on the left there, the Universal Classic Monsters: Icons of Horror Collection – Volume 2 box set is now official and (more importantly) available for pre-order! [Read on here...]

What’s more, all of the single-film SKUs from the Volume 1 box set are available for pre-order by themselves as well. You can see the cover artwork for all of these below (just click on each to visit the Amazon.com pre-order pages).

Also now available for pre-order on Amazon today is Taika Waititi’s latest installment in the Marvel Cinematic Universe, Thor: Love and Thunder, in 4K Ultra HD and Blu-ray. Street date is 9/27. Again, you can see the cover art below.

In other news today, we’ve confirmed with retail sources that Paramount will be releasing Quentin Tarantino’s Pulp Fiction on 4K Ultra HD on 11/1. We expect more details soon.

Also, Kino Lorber Studio Classics has revealed that they plan to bring Rian Johnson’s Brick (2005) to 4K Ultra HD in the months ahead with a new 4K HDR master.

Lionsgate has set Fall for release on Blu-ray and DVD on 10/18, with the Digital release planned for 9/27.

RLJE Films and Shudder have confirmed that George A. Romero’s The Amusement Park will arrive on Blu-ray, DVD, and Digital on 9/13.

GKids has now made its Studio Ghibli catalog films available for rent on all the major digital services.

And finally today, our friends at Classic Flix have announced that they plan to release The Little Rascals: The Complete Collection – Centennial Edition on Blu-ray on 11/15 (SRP $74.99). This set will include all of the previous Blu-ray releases (most of which we’ve reviewed here on The Bits (see Volumes 1, 2, 3, 4, 5—our review of Volume 6 is forthcoming) along with an exclusive Blu-ray Bonus Disc that includes a lot more new extras and rarities (including silent shorts, a new introduction by Leonard Maltin, portions of shorts that only survive in incomplete form, the 1951 Our Gang Reunion TV special, and much more). But the good news is that if you’ve already purchased the previous volumes, you can order just the Bonus Disc here on the Classic Flix website for only $17.99. And here’s the link to the Complete Collection.

All right, we’ll leave you with a look at the cover artwork for Thor: Love and Thunder plus all the Universal Monsters titles mentioned above. Just click on each to visit their respective Amazon.com pre-order pages... 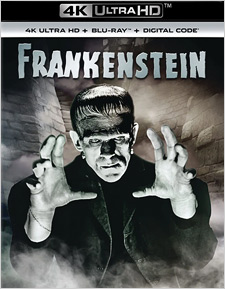 RT @BillHuntBits: My friend @MovieMantz has just released a terrific episode of his @enterincidents podcast featuring new interviews with A…