Shout! & GKids to release Weathering with You in 4K Ultra HD, plus Shatner’s The Captains Collection, High Plains Drifter & more 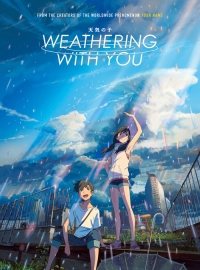 All right, we’ve got some more announcement news for you today...

First up, our friends at Kino Lorber Studio Classics have revealed that they’re releasing Clint Eastwood’s High Plains Drifter (1973) on Blu-ray on 10/27. It’ll include a new audio commentary by filmmaker Alex Cox, new interviews with actors Marianna Hill and Mitchell Ryan, a vintage promo for the film restored in HD, Trailers from Hell segments with Josh Olson and Edgar Wright, a poster and image gallery, 2 theatrical trailers (in HD), a TV spot, a radio spot, and a limited edition slipcase.

But that’s not all: Also coming to Blu-ray that day is Don Seigel’s Two Mules for Sister Sara, starring Eastwood and Shirley Maclaine, featuring new 4K restorations of both the 112-minute International Cut and the 104-minute Domestic Cut. Extras will once again include a new audio commentary by filmmaker Alex Cox, At Home with Clint (a vintage candid interview with Clint Eastwood in HD), a poster and image gallery, the theatrical trailer (in HD), 2 TV spots, 4 radio spots, and a limited edition slipcase.

Also coming soon from KL Studio Classics is Oz Scott’s Bustin’ Loose (1981) starring Richard Pryor. And the company has just kicked off its “Lazy Hazy Crazy Summer” sale on over 500 in-stock titles. It runs until 8/3. [Read on here...]

Meanwhile, Shout! Factory has revealed The Captains Collection on Blu-ray on 10/20 (SRP $43.49), featuring “William Shatner’s incredible in-depth look at the creation, evolution and legacy of Gene Roddenberry’s Star Trek.” You’ll get the documentaries The Captains (2011), The Captains Close-Up (2013), Chaos on the Bridge (2014), and Get a Life! (2012), plus the extras The Making of The Captains, Additional Stories, the Ponder the Mystery music video, and trailers. However, if you order directly from Shout, you’ll get a Special Edition of this release (SRP $74.98) that includes an additional exclusive disc adding William Shatner’s Gonzo Ballet (2009), The Captains: Extended Interviews, and Chaos on The Bridge: Extended Interviews. The Special Edition is limited to just 2,000 units. And if you’re really into the Shat, you can get The Captains Collection: Special Edition bundled with an exclusive “splatter vinyl” album of William Shatner’s Has Been (SRP $99.99). That’s limited to just 1,000 units. The Great Bird bless him, Bill Shatner’s lived a 1,000 lives, all of the more interesting than mine. ;)

Here’s a surprise for you 4K Ultra HD fans: Shout! Factory has also announced that (along with GKids) they’ll be releasing Makoto Shinkai’s acclaimed anime Weathering with You as a 4K Ultra HD Collector’s Edition on 11/17 (SRP $79.98). The 4-disc set will include the film on 4K UHD and Blu-ray, along with a bonus Blu-ray containing the documentary the feature-length documentary The Making of Weathering with You and the film’s soundtrack on CD. You’ll also get a 104-page perfect bound book, a mini poster, a decal sticker, and a hard slipcase to hold it all. We don’t get have technical details yet, but assume HDR10 high dynamic range for now. We’ve updated our 4K Ultra HD Release List here at The Bits accordingly. Note that regular Blu-ray, DVD, and Blu-ray Steelbook editions of this film will also be available on 9/15.

Also, fans of Blumhouse may be pleased to learn that Universal is releasing a Blumhouse of Horrors: 10-Movie Collection on Blu-ray that same day (SRP $99.98) that includes The Purge, Ouija, The Boy Next Door, Unfriended, The Visit, Split, Get Out, Happy Death Day, Truth or Dare, and Ma.

And Universal has set the Kevin Bacon/Amanda Seyfried thriller You Should Have Left for release on DVD and Digital on 7/28.

In other news today, The Film Detective has announced the 7/29 Blu-ray release of the Poverty Row/pre-code film, The Sin of Nora Moran (1933). Directed by Phil Goldstone, it stars Zita Johann as “a young woman sentenced to death for a murder she did not commit.” Extras include a documentary on Johann and more.

Lionsgate has set (don’t laugh) Kelly Reichardt’s First Cow for release on Blu-ray, DVD, and Digital on 9/8. The moo-vie seems to be getting great reviews, so it might be worth checking out. Side note: This is one of the final two films to co-star the late René Auberjonois, so it’s probably worth a look for that reason alone.

IFC Films has set How to Build a Girl for release on Blu-ray and DVD on 8/11, followed by The Trip to Greece with Steve Coogan and Rob Brydon on both formats on 8/25.

One last Blu-ray and DVD related item, following up on our post about Zavvi from yesterday: Not only is The Digital Bits a Zavvi affiliate, we’re now an affiliate of both their US/Canada and UK online stores. So if you live in Europe or internationally, you’ll want to shop via the UK link (click here). And if you live in North America, shop via the US/Canada store (click here). We’ve also created Zavvi “quick link” buttons that will now be included in every daily news column just after the break. You can see those here:

Finally today, we’ll leave you with something amusing. My friend Eric B. brought this Movieweb story to my attention on Facebook: The Oma Cinema chain in Paris has just revealed a new movie theater design based upon the Galactic Senate chamber from Star Wars: The Phantom Menace. So the next time you’d like to stand up in the middle of a movie screening and call for a vote of no confidence in Chancellor Valorum, you know where to go.

And that’s all for now! Stay tuned...

Today on The Bits – Yes, it appears that @Disney currently has no more plans for live-action catalog titles on physical #4K #UltraHD thedigitalbits.com/columns/my-two…

Bits readers, here's some Friday reading for you: Jahnke's Electric Theatre is back with the excellent Disney-Plus-Or-Minus, this time covering the forgotten #Disney live action film The Story of Robin Hood and His Merrie Men from 1952. @DrAdamJahnke jahnkeselectrictheatre.com/disney-plus-or…