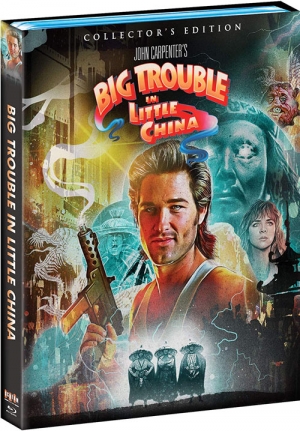 We’ve got a few interesting news items to report today, but first some more reviews...

Tim has posted his thoughts on Scream Factory’s new The Omen Collection Blu-ray box set and it sounds like it’s pretty fantastic. The title is well worth a look and you’ll find the review here.

Also, Dennis has turned in his thoughts on The Art of Self-Defense on Blu-ray from Universal and the remake of The Lion King (2019) from Disney also on Blu-ray.

And I’m working on a review of Warner’s The Wizard of Oz in 4K Ultra HD, which looks absolutely fantastic. The title streets on Tuesday and I hope to have my review posted on Monday. So stay tuned for that. [Read on here...]

Witness If You Will... A Retrospective: Remembering “The Twilight Zone” on its 60th Anniversary

“The Twilight Zone was an enormously creative television series anchored by one of the true giants of the medium, Mr. Rod Serling, a master storyteller who was given unprecedented control over his work. In terms of quality, no show touches it in consistent quality.” — Steven Jay Rubin, author of The Twilight Zone Encyclopedia

The Digital Bits and History, Legacy & Showmanship are pleased to present this retrospective commemorating the 60th anniversary of The Twilight Zone, Rod Serling’s classic anthology series which originally ran on CBS from 1959 to 1964.

The Twilight Zone premiered sixty years ago this month and for the occasion The Bits features a Q&A with a quartet of Rod Serling authorities and classic television historians who reflect on the timeless series (and its offspring) six decades after its debut. [Read on here...]