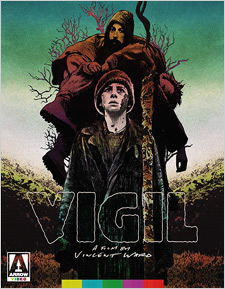 [Editor’s Note: This is an All Region Blu-ray release.]

Prior to Vincent Ward’s more popular work The Navigator: A Medieval Odyssey, he began his career as a filmmaker with one of New Zealand’s more interesting exports, Vigil. Telling the story of a family living a simple country life whose world is turned upside down after the death of the father, it explores the nature of loss and change and how both affect those left behind, particularly a young girl named Toss who is immediately fascinated with their new farm hand, but also perceives him to be a potential threat.

Vigil is a gorgeous film to look at, there’s no question about that. Vincent Ward is basically a painter and his films are more about how they look than they are anything else. It’s where some of his detractors begin to dig in, with some seeing his work as more pretense than poetry. Every shot is distinctly filled with visual information, whether it be the New Zealand landscape, the interiors of an old farmhouse, or the inside of an abandoned car; all of it works to tell the film’s story visually, making it more of a piece of artwork than a straight narrative.

Outside of its visual flair, the performance from Fiona Kay as Toss is the entire axis of the film’s main appeal for most viewers. She’s absolutely compelling, hardly ever speaking any dialogue, but her plight as she deals with the loss of her father and the sudden but unstoppable threads of puberty creeping up inside her keeps us in a state of constant concern for her. The overall theme of change and how it concerns her relationship with her estranged mother, her grandfather, and a potential replacement father figure in her life are the true heart of the film.

The finest aspect of Vigil overall is that it feels truly foreign, which is perhaps its greatest strength. Based upon the reaction that it received when it was screened in competition at Cannes in 1984 (the first New Zealand film to do so), critics were immediately divided on it. Some felt that the beauty and the style of it outshined all of the other elements, whereas others could only focus on its lack of an obvious narrative. Regardless, it’s a fascinating piece, and for a fledgling filmmaker’s first major work, it’s astonishingly well-made.

Arrow Video’s presentation of the film comes sourced from a restoration that was carried out by the New Zealand Film Commission and both supervised and approved by Vincent Ward himself. It’s a lush presentation, organic in appearance with solid levels of fine grain throughout and enormous amounts of detail. The dark and dank New Zealand landscape with its lush foliage, interesting rock formations, and rolling valleys, all under a cloud of fog and rain, are beautifully-realized in high definition. The color palette is potent as well, with greens and reds popping off of the screen, as well as perfectly natural skin tones. Black levels are extremely deep, although a tad bit of crush is present, which is likely from the original cinematography. Everything appears bright and crisp with no stability issues and no major film damage leftover to speak of other than some occasional mild speckling. The audio is provided in English mono LPCM with optional subtitles in English SDH. Although it’s narrow by its very nature, it’s a low key soundtrack for the most part. Everything is separated well with no distortions, while occasional dialogue is clean and clear.

Extras include a new 13-minute video appreciation of the film by critic Nick Roddick, who covers much of New Zealand’s film history, how he discovered Vigil, and his relationship with it; Country Calendar, a 1983 episode of the New Zealand TV show which reported on the making of the film under its original title First Blood, Last Rites, also giving us a glimpse of the set and the locals who participated in the making of it; an archival 8-minute excerpt from the 1987 documentary NZ Cinema: The Past Decade with Vincent Ward, which also speaks to film critic Nicholas Reid briefly about the film; a trailer; and a 20-page insert booklet with the essay "Vigil" by Carmen Gray and restoration details.

Vigil is definitely not a film that everyone is going to appreciate. It’s just not that kind of film. It’s art piece that takes some time to acclimate to if you’re unfamiliar with it and not prepared for it. I would have actually liked to have heard more about the film from Vincent Ward today as the documentary excerpt just wasn’t enough, but regardless, this is a fine package with a top notch presentation of a beautiful film.