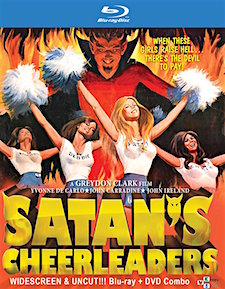 At any given time, there are a vast majority of “bad” movies out there yet to be discovered, whether they’re hidden in the rough or simply haven’t been experienced yet. As somebody who continuously punishes himself by seeking out the worst, or simply discovering it by accident, I don’t often come across anything that makes me want to reach into the proverbial bucket of hatred and throw a heaping pile of vitriol at it... not even Satan’s Cheerleaders.

Most Mystery Science Theater 3000 fans are likely familiar with Greydon Clark’s work through his Charlie’s Angels knock-off Angels Revenge. Surrounding that film is a variety of films of varying qualities, with pretty much all of them at cult status almost by default. Satan’s Cheerleaders, yet another effort to cash in on 1970s cinematic Satanic panic, features a mixed mess of sexploitation and horror/thriller elements. A group of nubile cheerleaders are on their way to an away football game when they are sidelined by a group of Satanists after the school janitor curses their clothes. Granted this plot doesn’t kick in until almost 30 minutes into the film, but I digress.

Satan’s Cheerleaders is what most would consider a good/bad movie, but mostly bad and desperate for good. To be brutally honest, for the majority of the film’s running time, I’d rather be puncturing my own eardrums with an ice pick than sitting through any of the dialogue exchanges. Less than savory paydays for John Ireland, Yvonne De Carlo, and John Carradine late in their careers, it was also a pre-Halloween project for cinematographer Dean Cundey, who also worked on Clark’s other films Angels Revenge, Black Shampoo, and Without Warning. The film’s mix of titillating teen comedy and supernatural horror doesn’t meld, to say the least, and most of the performances are pretty poor. Not a good movie by any stretch of the imagination, Satan’s Cheerleaders definitely has a more intriguing title than what’s present in the final product.

VCI Entertainment presents the film on Blu-ray with “video mastered from a new 2K scan from the original 35mm negative.” There’s also the option of watching either the “restored” version or the “original” version, meaning in terms of A/V quality, not content. Both presentations feature variable grain levels, but the restored version contains much less grain with an overall softness. The color palette has some occasional potency, but is unremarkable otherwise. Black levels are thoroughly crushed, meaning that during scenes of extreme darkness, you literally cannot tell what’s going on. Thankfully, these moments are infrequent. Otherwise, the frame is generally bright enough with satisfactory contrast. Between the two versions, there are also erratic density issues, as well as wobble, although the restored version is slightly more stable. Both versions also have their fair share of leftover damage, but the original features much more of it with scratches, speckling, dirt, and color staining. Aesthetically, the unrestored original may be the way that certain folks would prefer to experience the film, but it’s totally up for grabs which one is better than the other. The audio for both versions is presented in English 2.0 LPCM with optional English subtitles. The obvious deficiencies in the unrestored version are things like obvious hiss and occasional crackle. Both soundtracks also usually favor the left speaker more than the right, so there’s a balancing issue there as well. The aforementioned dialogue is fully audible, but score and sound effects are severely dated without much of an impact. However, some thought was put into certain moments, such as Yvonne De Carlo’s evil chant towards the end of the film, which makes it sound like she’s falling down a well. Otherwise, there isn’t much else to the audio.

The extras are brief, but well-worth a look. They include two audio commentaries, one with director Greydon Clark himself, and the other with filmmaker David DeCoteau and film historian (and personal favorite) David Del Valle. Both commentaries are well-worth listening to, but the latter is far more entertaining and interesting than the film itself. DeCoteau and Del Valle spend the bulk of their time talking more about the actor’s careers than the actual film, which isn’t a bad thing. What’s there to say anyway? In addition, there’s also an animated still gallery and a DVD copy of the film. Not included from the previous DVD release from the early 2000s is the film’s theatrical trailer, as well as the trailer for another VCI release Ruby.

Your tolerance for no budget 1970s horror, extremely poor performances, and rollicking disco music (the best thing about the film, now that I think about it) will likely color your enjoyment of Satan’s Cheerleaders. It’s not without its charm, but eventually, your interest in it will wear pretty thin until you get to the actual plot, which has some fairly bonkers moments. VCI’s release of the film has its merits, but I doubt most aficionados will give it the time of day. It’s a tough film to recommend, but a decent upgrade of its DVD incarnation.

Today on The Bits – David Fincher’s Panic Room is coming to #4K at last, plus Bagdad Cafe, Lupin the 3rd: Mystery of Mamo, Trekkies 25th & much more thedigitalbits.com/columns/my-two…