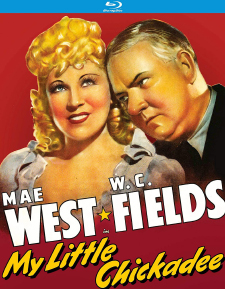 My Little Chickadee was the one and only collaboration between two of the greatest comedians of their era, Mae West and W.C. Fields. The pairing failed to produce the sparks that anyone would have hoped for, at least onscreen—the real fireworks supposedly happened behind the scenes. Of course, it’s difficult to sort fact from fiction in all of the tales about the making of the film, but as Carleton Young said in The Man Who Shot Liberty Valance, "This is the West, sir. When the legend becomes fact, print the legend." True or not, the legends about the production are nearly as entertaining as the film itself.

My Little Chickadee tells the story of the scandalous Miss Flower Belle Lee (West), who’s forced to leave town until she can prove that she’s become respectable. During the train ride out of town, she meets up with Cuthbert J. Twillie (Fields) and arranges a sham marriage between the two of them to help her gain that respectability. Of course, Twillie is anything but a picture of propriety, and their misadventures will take them even farther afield before the finale.

The film was directed by Edward F. Cline, though he said that he acted more as a referee than as a director. The screenplay was credited to West and Fields, but she later claimed to have written most of it herself and that she just let him add his own schtick in a few places. While the script passed through many hands before reaching the screen, it is likely true that the majority of the final shooting script came from her. On the other hand, Fields died just six years after it was released, so he was no longer around to claim otherwise.

The issue with pitting these two comedians against each other was that they both performed their best when paired with a straight man (or woman). It was not simply a matter of their egos clashing, but also their personas. The genius of a group like the Marx Brothers was that they were willing to shift roles as the situation required. Groucho may have acted the clown with Margaret Dumont, but he became the straight man when working with Chico, and Chico would play it straight when paired with Harpo. Both Fields and West liked to subvert traditional values, but for that to work, they had to play against someone who represented those values. That’s why they’re at their best in My Little Chickadee when paired with the wonderful Margaret Hamilton, who was a perfect foil for them. Together, however, they proved that it’s difficult to subvert someone who is already subverting everyone else.

Still, My Little Chickadee does have plenty of memorable moments. Some of the best are throwaway gags, such as the reaction that Fields has when he discovers that he’s accidentally swapped hats with a small child on the train. (The child actor proved the perfect straight man by barely reacting at all in return!) Putting West and Fields together may not have been a complete artistic success, but it was a financial success for the studio, and it provided enough laughs to earn its place in history.

My Little Chickadee was shot on 35 mm film by cinematographer Joseph Valentine and framed at 1.33:1. This version was scanned in 4K from a 35 mm nitrate composite fine grain print and a 35 mm dupe negative, with the entire workflow for the project at 4K resolution. The restoration was performed by Universal Pictures in collaboration with The Film Foundation, with Martin Scorsese and Steven Spielberg serving as consultants. The results are simply gorgeous. All damage has been meticulously cleaned up on a frame-by-frame basis, leaving the underlying image intact—if any DNR has been applied, it’s been done with a very light touch. Grain looks natural and there’s an abundance of fine detail throughout the film. Watch for the moment when Fields hands his card to West; the close-up shows beautiful textures in the paper, the printing, and the fabric of his gloves. Valentine used diffusion filters in some shots and there are also optical transitions which are understandably softer than the surrounding footage, but it’s all inherent to the original production. The grayscale is accurate, the contrast range is good, and black levels are solid. For those of us who grew up watching poor quality prints of the film on TV, this transfer will be a revelation.

Audio is offered in English 2.0 mono DTS-HD Master Audio with optional English subtitles. It was restored from the optical tracks on the 35 mm fine grain print. While the fidelity is limited by the source, the dialogue is intelligible and everything sounds clean.

Extras on the disc include the following:

The commentary with film historians Alexander Heller-Nicholas and Josh Nelson gives a fine overview of the production and many of the stories involved in the making of it, such as the teetotaler clause that West insisted on including in her contract to shut down the production if she ever caught Fields drunk. They discuss West’s sexuality, her clashes with the censors, and her place as the real auteur of her work regardless of who was behind the camera. They look at her life and how the film’s subversion of marriage as a redemptive act parallels West’s own failed marriage. The only issue is that the majority of their commentary is confined to West and ignores Fields—the whole thing is pretty one-sided for a film which is built around putting the two stars together. It’s still a valuable commentary, but because they chose to take West’s stories about the making of the film at face value, it would have been nice to have heard alternative perspectives.

For all of its flaws, My Little Chickadee remains cheeky right up to the end—quite literally, as anyone who has seen it will attest. It’s far from the most enjoyable film made by either of its legendary lead actors, but there’s plenty here to enjoy. The beautiful transfer alone is worth the price of admission, and it should please old fans as well as new ones.