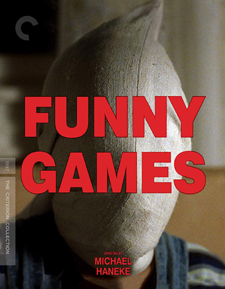 A family travels by car, with a sailboat on an attached trailer, to a lakeside cottage for a pleasant, restful vacation in the Austrian film Funny Games (1997), director Michael Haneke’s harrowing tale of home invasion, dark farce, and terror. Georg (Ulrich Muhe) and Anna (Susanne Lothar) and their young son Schorschi (Stefan Clapczynski) soon find two polite young men at their cottage door who turn their lives into a nightmare.

It starts innocently enough when Peter (Frank Giering) asks to borrow some eggs. Since Anna has seen him with their friends on the way to their cabin, she lets him in and gives him four. He thanks her and leaves. Then he drops the eggs. Somewhat annoyed, Anna cleans up the mess. Peter asks her for four more eggs. Shortly afterward, Paul (Arno Frisch) shows up. Both young men are dressed in white. They smile pleasantly but seem to be toying with Anna. When Georg comes in, she asks him to throw them out. But they have no intention of leaving. This is just the beginning of a series of “games” they will play with the family – games they enjoy at the expense of the suffering of three innocent people.

The rest of the film deals with the “games,” with violence as a real consequence if the family won’t play. Georg and Anna are basically trapped in their own home, fearing for themselves and their son as Peter and Paul escalate their games to frightening levels. It gets to a point that the family realizes they may never survive this encounter and become overwhelmed by fear of what horrors the pair might inflict on them next.

Director Michael Haneke made a brutal film that stands apart from most of the horror genre. It doesn’t rely on graphic visuals as much as on psychological horror. Little is revealed about Peter and Paul and why they are playing these games. They simply show up, as if they chose this particular family at random for their own sadistic pleasure. They amuse themselves by presenting sick scenarios to the captive family, who cringe in dread of what the outcome will be. They even break the fourth wall and rewind events if they don’t like how they turn out.

Funny Games is not for everyone. Haneke goes pretty far in portraying the effects of the evil duo’s game playing and is masterful at creating, building, and sustaining suspense. He knows how to rivet the viewer’s attention, and occasionally uses very long takes to avoid sacrificing growing tension. One particular take, after an especially awful incident, is held for nearly ten minutes with little movement from the characters as they recover. Haneke later remade Funny Games in 2007 with an American cast headed by Naomi Watts and Tim Roth.

Criterion's Blu-ray release features an aspect ratio of 1.85:1. The visual quality is very good throughout, with excellent contrast. The widescreen format is effective in presenting five characters in the same composition in a small hallway and in showcasing the peaceful lakeside setting. Most of the film is shot indoors, but early scenes feature aerial photography of the family driving to the cabin on a sunny day. At the lake, Georg and his son ready the sailboat while Anna puts groceries away in the kitchen as the family settles in. The color palette tends toward brighter hues. In contrast with the casual clothes worn by the target family, Peter and Paul are completely dressed in white and wear gloves. This automatically sets them apart as odd. The interiors are darker, in keeping with the atmosphere director Haneke is creating. Close-ups are used sparingly. One, of a rolling golf ball, sends chills.

The audio is DTS-High Definition Master Audio 5.1 Surround. The soundtrack is German, with English subtitles. Dialogue is clear. Frisch is particularly creepy with his calm, ever-so-polite manner that masks sociopathic monstrosity. The film starts with classical music as the family drives to the cabin, but as Funny Games in huge red letters appears, the music changes abruptly to a heavy metal, almost cacophonous blaring, foreshadowing that what is to come may not be so peaceful.

Bonus features on the new 2K digital restored Blu-ray supervised by Michael Haneke include new interviews with Haneke and actor Arno Frisch, a new interview with film historian Alexander Horwath, a press conference from the 1997 Cannes Film Festival, a trailer, and an insert booklet containing a critical essay.

Interview with Director Michael Haneke (in German with English subtitles) – This interview was recorded in Vienna in 2017. Haneke used the thriller genre to show how easily an audience can be manipulated. He wrote the script in 1967 or 1968, which was then called Weekend. When he didn’t get adequate financing from the German Film Fund, he abandoned the project and went on to work in TV and theater, reviving and reworking the script much later. He compares Funny Games to Desperate Hours starring Humphrey Bogart. The intruders are stereotypical but act realistically. When using clichés, the story must remain plausible. The family is in a drama, while Peter and Paul are in a farce. When the villain enjoys inflicting pain, it’s more unbearable for the audience than if there is compassion. The intruders are “amusing themselves with the lives and suffering of other people.”

Interview with Arno Frisch (in German, with English subtitles) – Frisch refers to Funny Games as “a great film, one of the best I’ve been in.” He had starred in Haneke’s Benny’s Video and was contacted by Haneke shortly after graduating from high school to do the role of Paul. Frisch found the script totally different, noting “With a good script, you’re already halfway to a good film.” Frisch was told by Haneke to avoid sarcasm in his performance because there was so much in the script itself. Frisch spent a full day with Haneke and Frank Giering (Peter) going over the script. During shooting aboard a sailboat, the boat sank and a new camera was destroyed. The film was shot almost entirely in the studio, where there were no distractions and he could concentrate on his performance. He describes the technical aspects of filming a long take at the beginning of the film. Frisch refers to Paul as a stereotypical sociopathic serial killer whose power is fear. Paul has no specific identity. He could be anyone. The names of Peter and Paul are changed during the film to point out “the interchangeability of the characters.” Frisch and Giering gave Lothar and Muhe “their space” after scenes were shot. Frisch speaks about the intelligence and professionalism of child actors, especially Stefan Clapczynski, who plays the son. At the Cannes Film Festival, some audience members walked out because of the film’s “biting irony combined with brutality.”

Interview with Film Historian Alexander Horwath (in German with English subtitles) – Haneke directed the film contrary to what most people think a film should be. He refers to Funny Games as experimental, noting it’s hard to know where the film belongs in Haneke’s filmography. The “games” in the title refers not only to what’s happening in the film itself, but also to the games Haneke plays with us and our expectations and notions about what defines a thriller or violence in film. Haneke believes all reactions to the film – even negative ones – are legitimate. The film remains controversial to this day. Horwath references other movies built around “game culture” including The Matrix, The Game, Fight Club, The Truman Show, and Scream.

Press Conference from 1997 Cannes Film Festival – Director Michael Haneke, and actors Susanne Lothar, Ulrich Muhe, and Arno Frisch, respond to questions from members of the press. Haneke and cast discuss the genesis of the movie, production details, and the movie’s psychological intensity.

Booklet – The accordion-style insert booklet contains a critical essay by Bilge Ebiri and two color photos from the film.

RT @BillHuntBits: Bits #4K Review – My review of Peter Jackson’s THE LORD OF THE RINGS TRILOGY in #UltraHD from @WBHomeEnt is NOW COMPLETE!…

RT @BillHuntBits: Bits #4K REVIEW IN PROGRESS – @BillHuntBits checks out Peter Jackson’s THE LORD OF THE RINGS TRILOGY in #UltraHD from @WB…

Heads Up: Our friends at #MVD are having a #BlackFriday and #CyberMonday #Blowout #sale from today through December 1st on many of their #Bluray and #DVD releases. Up to 80% off SRP. Check it out! mvdshop.com/collections/bl…