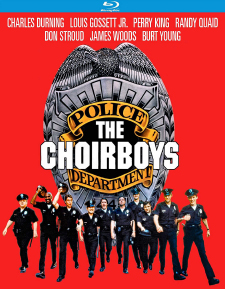 The Choirboys was a critical and commercial failure when it was released in 1977, and it hasn't picked up much of a cult following since, but there's plenty to appreciate for fans of director Robert Aldrich—though perhaps not so much for fans of Joseph Wambaugh. The story involves a disparate group of L.A. police officers who unwind from the pressures of their job by holding frequent “choir practices” together, which in reality are drunken revelries to blow off steam. Wambaugh wrote the first several drafts of the script after he sold the rights to his 1975 novel to Lorimar Productions, but Aldrich brought in Charles Knopf to do a rewrite. Wambaugh was so unhappy with the results that he wrote an open letter to the Writer's Guild in the form of a full-page ad in the Hollywood Reporter, petitioning to have his name removed from the project; final credit in the film went solely to Knopf. He also sued Lorimar for $1 million for breach of contract, though that was settled out of court. It was a watershed experience for Wambaugh, which is why he retained creative control over his next two film projects: The Onion Field and The Black Marble.

Aldrich's and Wambaugh's sensibilities were simply never going to align. Wambaugh was sympathetic to his band of misfit cops, but Aldrich felt no pity whatsoever for the plight of these officers. As he told Film Comment: “I don't know how to feel sorry for a cop. It's a volunteer force. You're not drafted to become a cop. So you've got to take some of the heat if you don't like what people think about you… I think you've got to show L.A. cops as brutal as they really are. And Wambaugh can't face that problem, so it's never touched in the book.” Both the novel and the film are black comedies, but they have markedly different tones; Aldrich’s film is harsh and unsparing throughout. As a consequence, when things turn more serious in the final act, it feels maudlin rather than compassionate. (The film also altered the ending of the book, much to Wambaugh’s dismay.) Wambaugh intended to indict the leadership under which the rank-and-file serve, and while that element certainly carried over to the film, Aldrich doesn't allow it to provide any excuses—he never let anyone get off of his particularly barbed hooks.

Aldrich assembled a truly remarkable cast for his adaptation, including Charles Durning, Louis Gossett Jr, Perry King, Clyde Kusatsu, Tim McIntire, Randy Quaid, Don Stroud, James Woods, Burt Young, and the tragically troubled Cheryl “Rainbeaux” Smith. Their hi-jinks can be amusing, though it's important to note that some of the humor hasn't worn well with time. On the other hand, that same quality seems fitting in terms of Aldrich's attitudes about these characters—not one of them is intended to be a role model, and the film isn’t necessarily sanctioning their behavior. Still, there are a few unfortunate moments which would have been better left on the cutting room floor. Yet while the attitudes towards gender and sexuality have dated, its central themes couldn’t possibly be any more relevant to many of the issues with policing that we face today.

The Choirboys was shot on 35 mm by cinematographer Joseph Biroc using Panavision Panaflex cameras and spherical lenses, and was framed at 1.85:1 for its theatrical release. The master that Universal has provided to Kino Lorber is an aged one which displays many of the deficiencies common to their older catalog transfers. Detail is inconsistent throughout due to the use of noise reduction, and while some of the closeups do look solid, many of the medium or long shots are scrubbed free of grain and fine detail. For example, the brown corduroy suit that James Woods wears later in the film—the texture is visible in close-ups, but completely smeared in all other shots. There's also ringing from artificial sharpening. Flesh tones are inconsistent, sometimes looking natural and other times looking far too red. Anyone who’s familiar with Universal's catalog output on Laserdisc and DVD will recognize the look of this presentation. It's still an upgrade over previous versions, but it could look much better than it does here.

Audio is in offered in English 2.0 mono DTS-HD Master Audio with optional English subtitles. The sound is clean and balanced with little in the way of distortion, and the dialogue is clear.

The following extras are included:

The audio commentary with film historians Howard S. Berger and Nathaniel Thompson is a spirited defense of The Choirboys. They cover details about the film’s production as well as its reception during its release, including personal stories about seeing it for the first time. Aldrich’s original cut apparently ran four hours, and while he knew that it had to be shortened, he was hampered by being unable to work with his preferred editor Michael Luciano. Some members of the cast were also apparently not very respectful toward him during the shoot. Berger and Thompson also discuss the differences between the book and the film, and how the diametrically opposed sensibilities of Aldrich and Wambaugh meant that those differences could never be reconciled. They note how Aldrich didn’t always signpost his condemnation of the rude and sometimes illegal behavior in the film, yet he still clearly wasn’t on the side of these officers. They find the humor more subversive than funny, which was true of Aldrich’s attempts at comedy in general. They also examine the way that the film was prescient about the issues with policing today, and how it captures some of the shocking things that we now see on body cam footage—most importantly, the emotional distancing that some officers have from their own activities. This commentary track is essential listening for people who have had a negative reaction toward the film; it may not change their minds, but it will still increase their understanding of it. The interview with Don Stroud is a brief but lively conversation with the actor, who talks about cast members James Woods, Perry King, Charles Durning, Tim McIntire, Burt Young, and Louis Gossett Jr. He explains how he originally wanted to play McIntire’s part instead. He also complains about how he wishes that Wambaugh had been in charge rather than Aldrich—Stroud may not have been one of the actors who treated Aldrich poorly, but he definitely didn’t agree with his approach.

The Choirboys isn't an easy film to appreciate, but it wasn't intended to be. Aldrich excelled at making films which could be read on different levels—The Dirty Dozen being the prime example. That film can be enjoyed simply as an entertaining action film, but it can also be read as a savage critique of the brutality of war. In the case of The Choirboys, however, all of its levels go to dark places regardless of any of the buffoonery on display. It’s a savage film, and proper appreciation requires meeting it on its own terms.