Brotherhood of Satan, The (Blu-ray Review) 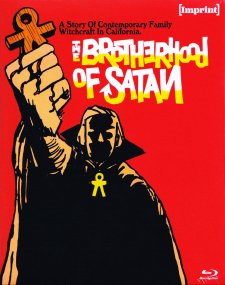 [Editor’s Note: This is a Region Free Import.]

Actor and Sam Peckinpah favorite L.Q. Jones decided to embark on a career of producing and directing in the late 1960s through to the 1970s. After helming the little-seen Western The Devil’s Bedroom and producing the horror film The Witchmaker (and prior to his greatest triumph as a director, A Boy and His Dog), he and his stalwart band of talent decided to make a new horror film independently, shooting it in widescreen and learning from the mistakes they made on previous films. The result, The Brotherhood of Satan, was later picked up by Columbia Pictures and released in the summer of 1971. Although it was later re-released on a double bill with Fragment of Fear, it didn’t generate much of an audience until the 1980s when it showed up on VHS and TV. And even now, it’s still on a slow, uphill climb. A steady and methodical film, many consider it to be an underappreciated gem, specifically for its widescreen composition and cinematography, but also for its uncharacteristic leading performance by Strother Martin.

While traveling by car, a husband (Charles Bateman), his new wife (Ahna Captri), and his daughter from a previous marriage (Geri Reischl) find themselves in the middle of nowhere. And after a sudden but ultimately mild car accident, the daughter goes missing. They wind up in a small town where the local sheriff (L.Q. Jones), his deputy (Alvy Moore), a preacher (Charles Robinson), and a country doctor (Strother Martin) are already dealing with the problem of missing local children. But right under their noses is an underground cult of Satan worshipers using the children to carry out a set of secretive and diabolical plans.

Imprint/Via Vision brings The Brotherhood of Satan to Blu-ray in an attractive package. The film was previously available in a 3-pack Blu-ray release by Mill Creek with Torture Garden and The Creeping Flesh, and was also recently released by Arrow Video. All three releases share the same high definition master with only two minor differences. Since the Mill Creek Blu-ray shared disc space with three other films, grain and detail were a bit more splotchy. The Arrow and Imprint discs don’t suffer from this problem at all. The Imprint disc is a little flatter overall, but both it and the Arrow disc offer healthy levels of grain and detail, even if the Arrow disc is slightly more refined. The Imprint disc is also a couple of degrees cooler and darker, so much so that screen captures were necessary to see the difference. The reds of the clothes worn by the children and the Satanists look a little more carmine on the Imprint disc and closer to scarlet on the Arrow disc. On all three releases, blacks are deep with great shadow detail and good contrast. Minor speckling is present and the opening is a little rough as it’s one of the few opticals in the film, but it’s an otherwise a stable and pleasant presentation, as well as a fine representation of the source material, regardless of which disc you’re watching.

The audio on the Imprint disc is included in English mono LPCM with optional subtitles in English SDH. The Arrow disc features audio in English 2.0 mono LPCM while the Mill Creek disc includes it in English 2.0 Dolby Digital. Even with slightly more speaker space, the audio is altogether flat, but with a decent amount of room for score and music, as well as adequate sound effects. Things get a little muddled when the over the top finale kicks in, but everything is well-represented. Dialogue is discernible as well. The best choice of the three comes down to the original mono and the 2.0 mono, though the purist in me leans toward the original one channel mono soundtrack.

Authors and film historians Troy Howarth and Nathaniel Thompson discuss their exposure to the film on TV during the 1980s, the filming locations, traumatic family horror films, the careers of the cast and crew, folk horror and paganism, the film’s counterculture aspects, the Manson murders and Rosemary’s Baby, various horror films and trends of the day, killer children movies, downbeat endings, Roger Corman’s influence, violence and ratings, the quality of the film’s visuals, and the film’s original title, Come In, Children. The film’s soundtrack is mixed a little too high on this track, meaning that their comments are nearly drowned out occasionally, but the overall track is entertaining and informative as a whole. In Ballyhoo Motion Pictures’ The Devil You Know, Justin Humphreys audibly takes us through the history of L.Q. Jones’ producing and directing career. Kim Newman discusses the evolution of horror in the 1970s, who worked on the film, and its various pros and cons. Rounding things out is the film’s theatrical trailer. The disc sits inside a clear amaray case with double-sided artwork, featuring alternate poster art used for the film’s Silver Series VHS release and a still from the film on the reverse. Everything is housed within a slipcase featuring a version of the original theatrical artwork.

While the Mill Creek Blu-ray release included no extras at all, the Arrow Video disc includes the following extras:

In the audio commentary with novelist and critic Kim Newman and filmmaker Sean Hogan, the two men discuss the film in detail while watching it together. They talk about it in regards to other Satanic themed films at the time, the cast and crew, unusual characteristics of the film, possible reasons why it didn’t become a bigger cult film, useless characters in genre films and books, American horror eccentricities, acting across generations, props in the film, the score, the influence of Roger Corman, child actors, Sam Peckinpah influences, TV movies, nudity, downer endings, and ambiguous endings. In Satanic Panic (incorrectly listed as From the Dark Past on the main menu), author David Flint discusses the obsession with the occult in the 1970s and how the film was tied into it. In The Children of Satan, now grown-up Jonathan Erickson Eisley and Alyson Moore, both child actors in the film, discuss their experiences making the film. Rounding things out are the film’s trailer, 2 TV spots, a “radio spot” (which sounds more like audio from one of the TV spots instead), and an image gallery containing 18 stills of production photos, press photos, and posters. Also included in Arrow’s package is a 28-page booklet featuring cast and crew information, Satan’s Cinephiles by Johnny Mains, The Death of Cinema is Not a Tragedy: L.Q. Jones and American Identity by Brad Stevens, transfer information, and a set of production credits. The disc and booklet sit inside clear amaray case with double-sided artwork, featuring new artwork by Richard Wells on one side and the original poster artwork on the reverse. Everything is housed within a limited slipcover featuring the same new artwork.

In short, both the Arrow and Imprint releases offer not just exclusive, but valuable extras, though it’s worth noting that the theatrical trailer is presented in HD on the Arrow disc.

The Brotherhood of Satan is one of those bizarre, low budget horror films that only deep-seated genre fans are going to appreciate since it doesn’t feature very many recognizable faces. It seems to function in its own weird way, with a plot akin to many other similar films. It’s an interesting film, more so than an enjoyable one, but many are bound to appreciate it on a technical level more so than a story level. Imprint’s Blu-ray release offers the film in excellent quality with nice extras. As to which release is better, this or the Arrow disc, it’s a bit of a draw since both offer similar presentations and quality extras. I’d say for fans, both are worth owning.