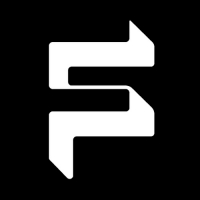 Sadly, the news today is dominated by the announcement that Turner Classic Movies and Criterion’s FilmStruck streaming service for well-curated classic, arthouse, indie, hard-to-find, and cult movies will be shutting down on 11/29 and has already stopped accepting new subscribers. You can read more here and here.

This is apparently driven the desire by AT&T, which recently purchased Time Warner, to streamline its business by cutting niche services. Though FilmStuck was wildly popular with cinephiles, the audience was small compared to the kind of mass market profit-making a modern media conglom-o-monster prefers. Said Turner and WB Digital Media in a statement today:

“We’re incredibly proud of the creativity and innovations produced by the talented and dedicated teams who worked on FilmStruck over the past two years. While FilmStruck has a very loyal fanbase, it remains largely a niche service. We plan to take key learnings from FilmStruck to help shape future business decisions in the direct-to-consumer space and redirect this investment back into our collective portfolios.” [Read on here...]

So, there it is. Woe unto you… niche audience media consumer. Your new corporate overlords aren’t interested in catering to your ilk. 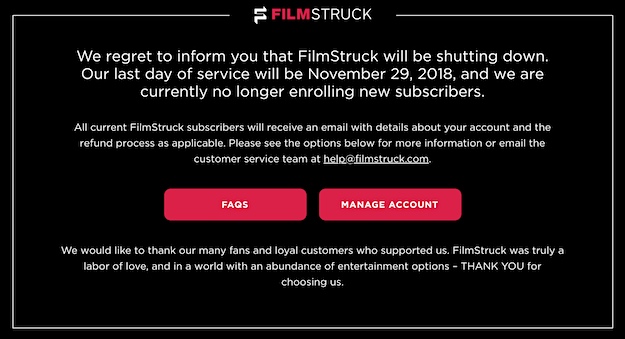 The sad truth is that this is almost certainly being done because AT&T wants to launch its own mainstream streaming service to compete with Amazon Prime, Netflix, Hulu, and Disney’s forthcoming streaming service.

But it’s still deeply frustrating for cinephiles, and I know many of you Bits readers count yourselves among their number. Much of this content simply isn’t available elsewhere digitally and some of it isn’t even available physically. Here at The Bits, for example, we are big fans of Akira Kurosawa. We’ve been waiting years for a decent HD master of the director’s Dersu Uzala (1975) to be released on Blu-ray… from Criterion, from anyone. But it’s not available. You can watch it on FilmStruck though and in HD too. There are many titles from the Janus Films library only available in HD on the service. Will all of the FilmStruck content be available elsewhere in the future? Some of it will probably end up on whatever service AT&T launches, but who knows?

This news comes in the wake of Netflix cancelling its popular Marvel Defenders-linked original shows Luke Cage and Iron Fist. There has been plenty of speculation as to why these shows were cancelled, but it’s a good bet the real reason has more to do with Disney not wanting competition from their own brands (Pixar, Lucasfilm, Marvel, etc) on competitors for its future “Disney Play” streaming service. Tough break for fans though.

Now… this would be yet another obvious opportunity to say once more why we prefer physical media over digital, but most of you are probably already thinking it yourselves. (Or maybe you don’t care.) The sad truth is that there was once a day, in the Golden Age of Physical Media, when almost any and every film or TV series title you wanted to see was just one mouse click and two days away in the mail from Amazon.com. Now, we’re headed toward a future where the vast majority of films – including older titles, and those that just don’t sell well – will be unavailable, no longer released physically and not available digitally either, abandoned in favor of newer and more profitable fare. There will be a dozen or more streaming services, each with exclusive access to the best loved content from certain studios and each with their own original shows. Want to watch it all? Be prepared to pay $100 or more a month for access. In other words, the price of a typical cable or satellite service. What was the point of cable cutting again? Spending less money each month? Oh well.

And going forward, the streaming content industry is almost certainly going to realize that most people don’t have the budget or appetite to subscribe to more than a handful of streaming services. So there will be the inevitable consolidation and shakeout, and we’ll probably be left with a few of the most powerful mega-players, and media consumers are just going to have to deal with it.

Ah well. Streaming is convenient, sure. Not every title is one you want to buy. But it’s hell for cinephiles.

To everyone at FilmStruck, thank you… and know that we are very sorry to see you go.

That’s enough for now. We’re currently working on reviews of Warner Bros. Home Entertainment’s The Matrix Reloaded and The Matrix Revolutions in 4K Ultra HD. We’ll post those as soon as they’re ready, probably later today or tomorrow. And we should have 2001 4K soon too, with a little luck.

So in the meantime… stay tuned…