We’ve been talking about this release for months now based on industry sources and retail leaks, but it’s finally official: 20th Century Fox Home Entertainment and MGM have set 007: The Daniel Craig Collection for release on 4K Ultra HD on 10/22.

The set will include Casino Royale (in its extended unrated version), Quantum of Solace, Skyfall, and SPECTRE.

Audio is DTS-HD Master Audio, but the discs will include Dolby Vision HDR.

Extras will be limited to audio commentary by the crew on Casino Royale, and two audio commentaries (one by director Sam Mendes and another by producers Michael G. Wilson and Barbara Broccoli and production designer Dennis Gassner) on Skyfall. [Read on here...]

So if you want to keep any of the other existing extras, don’t give up your previous Blu-ray special editions (or the Bond 50 box set).

This is an 8-disc set, with 4 Ultra HD discs, 4 Blu-rays, and a Digital Copy code. You can see the cover artwork at the right and also below, and you can pre-order the set on Amazon by clicking here or on the artwork below. The Amazon sale price is $54.99 (SRP $64.99). 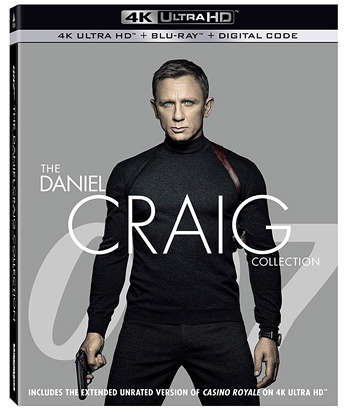 In other news, Disney+ is already live and being tested in the Netherlands, and based on reports from the region we’ve already got a pretty good sense of what films and TV series will be available when the service launches in the US on 11/12 (click here for list from Attractions Magazine and there’s more here at The Verge too). Critically for 4K fans – and Star Wars fans – Solo: A Star Wars Story, Rogue One: A Star Wars Story, and Star Wars: The Last Jedi are listed as being full 4K with HDR. The other films are still in HD only. But obviously, Rogue One hasn’t yet gotten a physical release in 4K – and we know that one is coming. We know that the rest of the Star Wars films are coming in physical 4K as well, so it’s very likely that the rest of the films will be upgraded on the site to full 4K as well in the weeks and months ahead. Meanwhile, if you’re eager to see Rogue One in 4K with HDR, you have no longer to wait than November 12th.

RT @BillHuntBits: This is just a trailer, but if INDIANA JONES looks this good in #UltraHD from @ParamountMovies, I'd say we've got somethi…