Meanwhile, here’s something awesome: The surviving cast of the classic 1960s Lost in Space TV series have reunited to celebrate the show’s 50th anniversary. They were interviewed on local TV in Los Angeles yesterday (you can watch the interview here). According to actor Bill Mumy (via his Facebook page – see his post here) the complete series is set for BD release is September from Fox. This following word over the last several months that all the original episodes have been remastered in HD from the original negatives. We would expect official word in the weeks and months ahead. If you live in L.A., the cast will be signing autographs at The Hollywood Show this coming weekend (at the Westin Los Angeles Airport Hotel – they’ll also be doing a panel discussion at the show on Sunday – see link here for details).  [Read on here…]

In other news today, we finally have what seems to be an official street date for Paramount’s Interstellar. It’s up for Blu-ray pre-order on Amazon with a street date of 3/31.

Sony’s Foxcatcher is also up for pre-order on Amazon with a street date of 3/3.

Also newly up for Blu-ray pre-order on Amazon from Warner Home Video: On the Town, Anchors Aweigh, Robin and the 7 Hoods, and a Frank Sinatra Collection – street date for all is 5/5.

Speaking of Warner, the studio has set the animated Batman vs. Robin for Blu-ray, DVD and digital release on 4/14 (SRP $29.96, $24.98 and $19.98). Extras will include “Batman vs. Robin” audio commentary, the Gotham’s City Secret: The Mythic Court of Owls and Talons of the Owl featurettes, a sneak peak at Justice League: Gods & Monsters, and “bonus cartoons from the DC Comics Vault.”

Warner has also announced Doris Day: The Essential Collection for DVD only release on 4/7 (SRP $79.98). The set will include 15 of her most iconic films as follows: April in Paris, Billy Rose’s Jumbo, By the Light of the Silvery Moon, Calamity Jane, The Glass Bottom Boat, It’s a Great Feeling, Love Me or Leave Me, Lucky Me, Lullaby of Broadway, My Dream is Yours, On Moonlight Bay, The Pajama Game, Please Don’t Eat the Daisies, Romance on the High Seas, and Tea for Two.

And on 3/10, look for Warner to release The Blade Trilogy on Blu-ray, as well as a Clash of the Titans set that includes the 1981 film, the 2010 remake and also Wrath of the Titans.

Meanwhile, Scream Factory has set Exterminators of the Year 3000 for BD release on 3/3. Extras will include audio commentary with actor Robert Iannucci, a video interview with Iannucci, and TV spots.

And Lionsgate has set Wahlburgers: The Complete Second Season for DVD only release on 2/17.

By the way, for some odd reason (possibly EON’s involvement) that John Barry Moonraker Kickstarter effort has been cancelled. Anyone who contributed is getting reimbursed. More details here.

We also have final cover artwork and details for Fox’s forthcoming Sound of Music: 50th Anniversary 2-Disc Edition Blu-ray due on 3/10. Look for it to include the remastered film with 7.1 DTS-HD MA audio, the all-new Your Favorite Things: An Interactive Celebration “immersive viewing experience with behind-the-scenes images, on-screen lyrics, trivia track and location quiz”, a Music Machine Sing-along, audio commentaries with Julie Andrews, Christopher Plummer and director Robert Wise, and (on Disc 2) the all-new hour-long The Sound of a City: Julie Andrews Returns to Salzburg documentary.

Here’s some Blu-ray cover artwork for you (click on the covers to pre-order on Amazon if possible)... 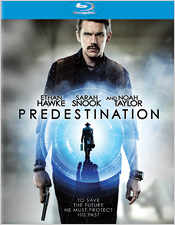 RT @ILMVFX: In case you missed it, be sure to check out @TheAcademy Science and Technology Council's Virtual Production Program featuring n…

Bits #4K Review – @timsalmons revisits The One, The Only, The Classic: HALLOWEEN—now available in a 3-Disc Collector's Edition #4K #UltraHD and #Bluray release from @Scream_Factory with a new #4K transfer from the OCN and lots of extras. @BillHuntBits thedigitalbits.com/item/halloween…