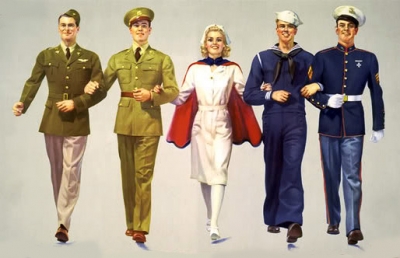 First up today, we’d like to send our warmest wishes to all you veterans out there on this Veterans Day 2016, whether you’re on duty now or have been in the past. From all of us here at The Bits, to you and your families, thank you for your service. Know that it’s appreciated.

All right, we’re closing out the week here at The Bits with my review of Akira Kurosawa’s Dreams, which is about to be released on Blu-ray Disc by Criterion. Look for it in stores next Tuesday. Let me tell you... it’s well worth your time and money. The film has quite simply never looked this good before and the Criterion team has once again assembled a wonderful batch of special features for Kurosawa fans. Don’t miss it.  [Read on here…]

On a personal note, these Kurosawa titles are some of my most eagerly awaited Blu-ray releases from The Criterion Collection, and I hope there are many more in the planning stages. I’d love to see an collection of Kurosawa’s early films on the format or, dare I hope, a beautiful remastered Blu-ray of his late overlooked classic, Dersu Uzala (1975). Fingers crossed.

Speaking of reviews, we’re working on several more for next week, including Independence Day: Resurgence in 4K Ultra HD Blu-ray format. So be sure to watch for that.

In announcement news today, here’s something terrific: Kino’s just revealed that they’re working on a new Blu-ray edition of George Melford’s The Sheik (1921) starring Rudolph Valentino. What’s more, they’ve just set One Million Years B.C. (1966) for Blu-ray release on 2/14, mastered from a brand new 4K restoration of the film. Extras will include both the 100-minute International Cut and the 91-minute U.S. release version, audio commentary by film historian Tim Lucas, 3 interview featurettes (with star Raquel Welch, SFX legend Ray Harryhausen, and actress Martine Beswick), an animated montage of posters and images, and theatrical trailers. You can see the cover artwork below.

Meanwhile, Scream Factory has announced the IFC Midnight release of Antibirth on Blu-ray and DVD, due tentatively in February.

Lionsgate has set The Whole Truth for Blu-ray and DVD release on 1/17/17, starring Keanu Reeves and Jim Belushi.

And Shout! Factory and MLB have set the Chicago Cubs 2016 World Series Collector’s Edition for Blu-ray and DVD release on 12/13.

Finally today, we’re very sorry to have to acknowledge the passing of music legend Leonard Cohen and veteran film and TV actor Robert Vaughn. My friend Matt Rowe has remembered Cohen better than I could over at MusicTAP today, and you can read more here via The New York Times. Meanwhile, Vaughn will forever be remembered as Napoleon Solo from TV’s The Man From U.N.C.L.E., but I’ll miss him for all those other, smaller roles he played over the years on film and television, including Gordon Cain, Gelt, Perry Holcomb, Edward Bolt, and many more. You can read more on Vaughn here at The Hollywood Reporter. Both men will be missed. 2016 has been a rough year for this sort of thing.

All right, here’s a little bit of cover artwork to leave you with (click on the covers to pre-order the titles on Amazon.com)...

Don’t forget that Denis Villeneuve’s The Arrival opens in theaters this weekend and it’s supposed to be one of the great high-concept science fiction films to come along in many years. It’s worth noting, if you don’t already know, that Villeneuve’s next film is going to be the sequel Blade Runner 2049. So go check out The Arrival. I sure will be this weekend.