One more Batman update with the November street date, plus pix from the Twin Peaks BD event!

Let’s close out the week by starting with a little more TV Batman release news. 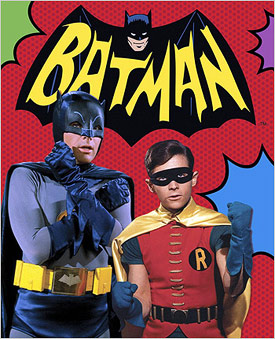 Not done with the Caped Crusader yet. We’ve also learned, thanks to Bits reader Greg R. who keenly spotted a promotional card Warner is apparently giving away (we’d bet you’ll see it at Comic-Con), that the official street for both versions is 11/11. See for yourself here… 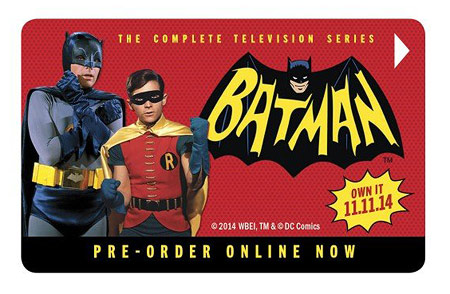 Also today, Scream Factory has announced Jeremy Gardner’s zombie horror film The Battery for Blu-ray and DVD release on 9/16. Extras will include audio commentary with Gardner (who wrote and stars, producer/star Adam Cronheim and producer/director of photography Christian Stella, the 90-minute Tools of Ignorance: The Making of The Battery documentary, the Rock Plaza Central at the Parlor: The Music of The Battery featurette, outtakes, and the film’s theatrical trailer.

Finally today, CBS held a promotional part up in L.A. on Wednesday night for the Blu-ray release of Twin Peaks: The Entire Mystery on 7/29 (pre-order it here on Amazon). Guests, which included David Lynch himself along with much of the original cast and crew, gathered at the Vista Theater to watch The Missing Pieces, which is essentially 90 minutes worth of deleted and alternate scenes cut by Lynch into its own film-like experience. Dr. Jahnke and I were on hand to see this on the big screen, but we’re not going to spoil that for you. Trust me – you really need to experience it for yourself. Afterwards, there was a reception at The Bigfoot Lounge with drinks and – just as you’d expect – a really good cherry pie. We thought you might like to check out some pictures from the event, so here’s a gallery. Enjoy!

Credit for most of these – especially the red carpet shots – goes to Casey Rodgers/Invision for CBS HE and Paramount/AP Images. However there are a couple right at the end there (you might recognize Dr. and Mrs. Jahnke and yours truly from The Bits, along with BD producers Charles de Lauzirika, Robert Meyer Burnett, and Cliff Stephenson, Dustin Dean from Lionsgate, and Alec Peters of Star Trek: Axanar fame, and yes… David Lynch) that we owe to the photographic talents of Diana Kingsbury.

On a related note, Burnett was Johnny-on-the-Spot enough to ask Lynch if there’s any chance of a Dune: Director’s Cut. Lynch simply laughed, shook his head and said “No.” as he departed. So there you have the official word on the matter.

That’s all for today, folks! Have a great weekend.

Heads-up re #StarWars: It appears the new Last Jedi #4K (w/score-only track, Meet the Porgs, no Dolby Vision) is only in the Skywalker Saga box for now. Disney says it IS coming separately (Solo too) in the new packaging—just not tomorrow. When I have the date, I'll let you know.