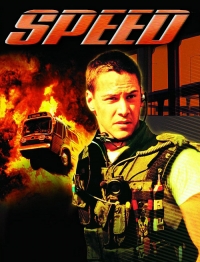 All right, we’ve got a brief update for you this morning here at The Bits, but it’s an important one.

In the wake of Disney’s announcement Wednesday of their plans to release Jan de Bont’s Speed (1994) in 4K Ultra HD on 5/4, which is a 20th Century Fox (now 20th Century Studios) catalog title, there have been a number of questions raised.

The official press release seemed to indicate that the Digital version of the film in 4K would include object-based Dolby Atmos audio, but the actual physical 4K Ultra HD disc would not.

There have also been rumors that the title would not include HDR, or that the studio would only include HDR on the Digital release.

As you can imagine, I decided to cut through the confusion to ask the studio about this directly. I’ve now heard back, so here are the official confirmed details on this release… [Read on here...]

The Speed 4K Ultra HD disc will indeed have high dynamic range in HDR10 format. So too will the 4K Digital version.

Neither the physical 4K Ultra HD or the Digital stream will have a new Dolby Atmos mix for this title. That was simply an error on the press release.

Instead, the physical 4K Ultra HD will include the previous 5.1 DTS-HD Master Audio mix that was found on the 20th Anniversary Edition Blu-ray release from 2014. The 4K Digital release will include 5.1 Dolby Digital audio only.

Again, all of this is 100% confirmed directly with Disney.

As mentioned in Wednesday’s update, many of the 2002 Five Star Collection DVD extras will carry over here, including audio commentary by Jan de Bont, audio commentary by Graham Yost and Mark Gordon, 7 featurettes (On Location, Stunts, Visual Effects, Bus Jump, Metrorail Crash, Action Scenes, and HBO First Look: The Making of Speed), and 6 extended scenes (Jack Shoots Payne in the Neck, Payne Lives/Cops Party, Annie’s Job, After Helen’s Death, Ray’s Crime, and the edited “airline version” of the Cargo Jet Explosion—that last one was an Easter egg on the DVD).

Note that Best Buy will have exclusive Steelbook packaging for this release. Here’s a look at both the regular and Steelbook versions (the Amazon link for the regular release will be added when it becomes available)… 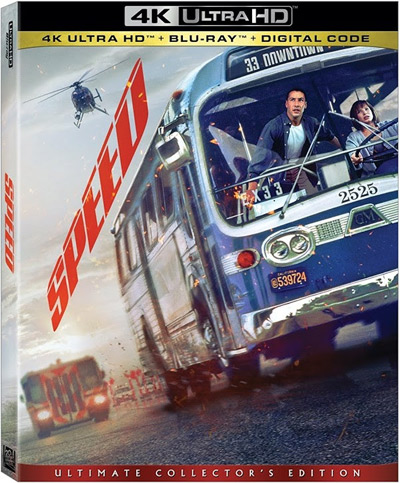 So there you go. Rest easy, Speed fans.

Finally this morning, just to sweeten this news (and to help start off the new week on a positive note), I’ve also officially confirmed with Disney that Michael Mann’s Heat (1995) is indeed coming to physical 4K Ultra HD later this summer. The street date is likely to be sometime in August, but that’s subject to change. Further details will be announced by the studio over the coming months.

And while this one is not officially confirmed yet by Warner Bros. Home Entertainment, our industry sources are telling us to expect Mel Stuart’s Willy Wonka and the Chocolate Factory to arrive in 4K Ultra HD in mid-to-late June in honor of the film’s 50th anniversary (which happens on 6/30).

Our 4K Ultra HD Release List here at The Bits has been updated accordingly.

By the way, if you’re are 4K fan, be aware that I posted an in-depth review of Gareth Edwards’ Godzilla (2014) here at The Bits on Thursday night. It’s a solid upgrade on the format with an appropriately monster Dolby Atmos mix.

Also be aware that we have more new UHD reviews coming for you shortly, including Soul and Spaceballs later this afternoon (with News of the World set to follow tomorrow). So keep your eyes peeled for them.

Bits #4K Review – @timsalmons revisits "More of the night HE came home"—HALLOWEEN II—now available in a 3-Disc Collector's Edition #4K #UltraHD and #Bluray release from @Scream_Factory with a new #4K transfer from the OCN and lots of extras. @BillHuntBits thedigitalbits.com/item/halloween…