The Blue Max, The Agony and the Ecstasy, Little House on BD, a look back at Zulu & more

Michael Coate has busy again today: He’s just turned in another great History, Legacy & Showmanship column with a look back at the release of Zulu on its 50th anniversary.  Not only does Twilight Time’s new limited edition Blu-ray start shipping out today, but Michael’s done an interview with film historian Sheldon Hall on the film’s release.  Enjoy!  [Read on here…]

Speaking of Twilight Time, the company has just started taking pre-orders for the limited edition Blu-ray release of Martin Ritt’s The Front (1976), George Sidney’s The Eddy Duchin Story (1956), John Guillermin’s The Blue Max (1966), Michael Camino’s Thunderbolt and Lightfoot (1974) and Woody Allen’s Crimes and Misdemeanors (1989). Head on over to this link at Screen Archives Entertainment to pre-order them.

And while we’re on the subject of Blu-ray exclusives, TCM Shop is currently taking pre-orders for 20th Century Fox’s The Agony and The Ecstasy. The title is due to ship on 3/4. Click on the link to pre-order. (Thanks to Bits reader Ned P. for the heads-up!)

Sony has officially set Spike Lee’s remake of Oldboy for release on Blu-ray and DVD on 3/4. Extras will include 2 featurettes (The Making of Oldboy and Transformation) and – on the Blu-ray exclusively – alternate and extended scenes, the Talking Heads featurette and a workout video promo.

Finally, Lionsgate has just set Little House on the Prairie: Season One for release on remastered deluxe edition Blu-ray and DVD on 3/25 (SRP $38.99 and $29.98). Extras will include original screen tests from Michael Landon and Melissa Gilbert and The Little House Phenomenon: Part One – A Place in Television History featurette.

Here’s a look at the Blu-ray cover art for Disney’s Delivery Man (3/25), The Agony and The Ecstasy and Oldboy… 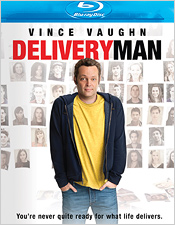 After checking out the excellent #Hamilton, waiting for you is Jahnke's Electric Theatre with the Disney-Plus-Or-Minus look at the great Cinderella. #Disney #Cinderella @DrAdamJahnke jahnkeselectrictheatre.com/disney-plus-or…

Today on The Bits – Winter is Coming: There’s a #GameofThrones: Complete Series #4K #UltraHD box set on the way thedigitalbits.com/columns/my-two…