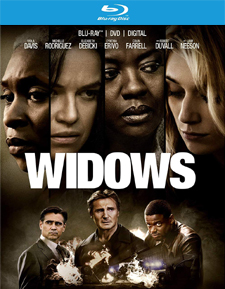 Veronica and Harry Rawlings (Viola Davis, Liam Neeson) are deeply in love and would be an average upper-middle class couple but for one exception. Harry is a highly successful bank robber. This occupation has afforded them a comfortable lifestyle, and Veronica knows full well how her husband earns such a handsome living.

During his latest robbery, however, things go terribly wrong. Harry and his team are killed in a blaze of bullets from a S.W.A.T. team and an explosion. Veronica is grief-stricken. She is also terrified. A politician running for local office, former drug dealer Jamal Manning (Brian Tyree Henry), claims her dead husband stole $2 million from him and demands that she return the money within a month. But the money Harry stole was burned up in a fire.

Veronica finds a lifeline when she discovers a notebook belonging to Harry and sees that it contains complete, detailed information for a robbery he was planning. To pay off the debt hanging over her, she enlists the help of his teammates’ widows – Linda (Michelle Rodriguez), a single mother whose husband’s debt wiped out her small business, and Alice (Elizabeth Debicki), a victim of spousal abuse who has reluctantly become an escort to make ends meet. They’re joined by a fourth accomplice, hairdresser Belle (Cynthia Erivo), who will drive the getaway car.

In Widows, director Steve McQueen puts an interesting spin on a popular movie sub-genre – the heist film. Usually, such movies feature male participants and focus on the intricacies of pulling off what seems a near-impossible task. Ocean’s 8 was the rare heist film with an all-female group of robbers.

Widows is a dark film with the danger of violence and even death palpable. Manning’s thug brother Jatemme (Daniel Kaluuya, Get Out) looms ever ready to administer street justice if the $2 million is not returned. A silent, glaring sadist, Jatemme knows how to extract information from those reluctant to share it.

Ms. Davis once again turns in a riveting performance that ranges from passion to resolute determination. She conveys so many emotions in a single take that we can see what she is thinking and feel her escalating fear as she gets deeper into the robbery plan. We see the events unfold mostly through Veronica’s eyes, and Davis carries the picture. She’s a fearless actress, willing to do what it takes to nail a scene, whether with subtlety or intensity. She’s a master at both.

There’s a sub-plot involving Jack Mulligan (Colin Farrell), a politician running against Manning in the upcoming election. He’s from a dynasty of politicians who have carved a permanent place in local Chicago politics. His father, Tom Mulligan (Robert Duvall), is a racist old-school party boss determined to retain power, but Jack has little taste for this style of politics.

Widows has some interesting twists along the way, which makes the film more than just a caper flick. Much of the interest centers on the planning, the assigning of tasks to the various women, and the establishment of a rigid timetable. Veronica whips her team into shape by stressing the alternative to failure – Manning will come after them and they will never feel safe. Performances are uniformly first-rate.

Rated R for violence and some sexual content, Widows features female characters who are smart and strong. Both thriller and social commentary, the film is fast-paced and suspenseful and offers a cast of fascinating characters who must navigate unfamiliar, dangerous waters.

The Widows R-rated Blu-ray release contains a 1080p resolution transfer. Aspect ratio is 2.39:1. Detail is especially pronounced in the close-ups, particularly Duvall’s grizzled, wrinkled face, Davis’ smooth skin and bright red lipstick, and Erivo’s staunch, tough expression and close cropped hair. Much of the film was shot either at night or in dimly lit locations to enhance mood. A few shots show Veronica (Davis) looking out windows or in mirrors as she remembers her husband.

Audio is English 7.1 DTS-HD Master Audio. The sound is well balanced, which is most noticeable in scenes with gun shots, car crashes, or explosions. Ambient background sound is present but never overpowers dialogue, which is consistently clear and precise whether spoken softly or with intense emotion. Subtitles include English SDH, French, and Spanish.

Plotting the Heist: The Story – Widows is based on a British series director Steve McQueen had seen years earlier. He was intrigued by the way it dealt with expectations that were put on women and what they were able to achieve. He wanted Chicago as the film’s location because of its many diverse neighborhoods. He hired Gillian Flynn to co-write the script because he wanted a woman’s perspective on the characters. She and McQueen got along well in a kind of symbiotic relationship. She notes about McQueen, “He keeps you on your toes.” The cast members were attracted to the roles because in their private lives, they had all been placed in a box, with limited expectations. The characters are from different walks of life and all are “tough, cool, troubled, deeply flawed women.”

Assembling the Crew: Production – The director and crew had to determine the emotional flow of the story. “What are we trying to say?” Widows contains more stunts and special effects than any previous McQueen film. The director wanted to get the audience involved immediately and adrenaline flowing. A heavily equipped van known as a “biscuit rig” is shown. A big sequence takes place at a warehouse, with gunfire and multiple explosions and a vehicle split in two and thrust into the air. The fire department and ambulances were on hand, but there were no mishaps. Viola Davis refers to director McQueen as “frighteningly honest,” and admits he elicited from her a “level of vulnerability, of nakedness” important for the character of Veronica. All major actors and key crew personnel offer their input on story and characters.

The Scene of the Crime: Locations – Several locations, including Atlanta and New York, were considered, but director Steve McQueen liked the multicultural nature of Chicago, noting the “city was a great match for the story.” Locations covered a lot of ground, from the projects to luxury high rises. Chicago becomes an integral part of the film. Location supervisor Nick Rafferty describes the months-long process of scouting the city, taking photographs, looking for interesting and workable locations for scenes in the movie. Some places were easy to find, others more difficult. Filming took place, among other places, in Little Village (the Latin section), the Polish enclave, a housing project on the South Side, and a garage (standing in for the film’s hideout) that had been there since the 1930s. Mulligan’s mansion suggests he was part of the established political history of his family. The proximity of wealth and poverty is striking.