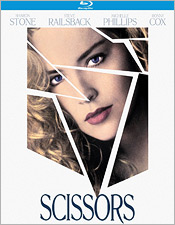 Writer-director Frank De Felitta’s Scissors isn’t exactly a good movie, but it’s possibly the most unpredictable one I’ve ever seen. Its final fifteen or twenty minutes – maybe even its final hour – are impossible to see coming, which goes a long way toward recommending the unconventional thriller. On the other hand, part of the reason the plotting is so unpredictable is that it’s extremely ridiculous – it provides some nice surprises in the moment but doesn’t hold up to five minutes of scrutiny once the film is over. The upshot is that at best Scissors is little more than a curiosity, a relic of its era as a VHS staple and one of the last films Sharon Stone made before Basic Instinct catapulted her to stardom.

Stone gets to act up a storm as Angie Anderson, an extremely off-balance young stenographer who is thrown even more off balance by an attempted rape in an elevator. A neighbor (Steve Railsback) comes to her rescue and the promise of romance arises, but the neighbor’s motives are unclear – as are those of his handicapped twin brother and his ex-girlfriend, who seems to hang around an awful lot. Angie seeks help from a therapist (Ronny Cox) as well, but no one seems able to help her get to the bottom of what was troubling her even before the assault, or to help figure out the identity of the mysterious man in the elevator. From here De Felitta (who also wrote the screenplays for Audrey Rose and The Entity) spins an increasingly bizarre yarn that strays in a lot of offbeat directions – not all of them entirely convincing.

The sheer weirdness of the piece makes it compelling, particularly in the final act when we learn where all the various story strands have been leading – and which ones are blatant red herrings. Stone’s performance is really something to behold; playing a woman in an emotionally fragile state gives her an excuse to play everything in a heightened register, and she fully commits to the extreme nature of the character, and of the piece as a whole. It’s actually a pretty strong performance, though the situations and dialogue grow so absurd by the end that most people probably won’t perceive it that way. Stone gives her all to the movie, but the movie isn't quite worthy of her. Nevertheless, for enthusiasts of oddball cinema it’s well worth a look, and Kino Lorber’s new Blu-ray is a vast improvement over the way most of us first encountered this film when it was a staple on video rental shelves in the early 1990s. (The success of Basic Instinct raised Scissors’ profile on VHS beyond what it really deserved.) The transfer is detailed and clear, particularly in the many darker sequences, and there’s a nice sense of film-like grain as well as faithful skin tones and vibrant colors. The stereo DTS-HD mix is fine too, with a nice balance between atmospheric city noise and dialogue that subtly enhances the overall sense of paranoia and unease. The disc contains no special features, which is a bit unfortunate given the film’s eccentric nature; I, for one, would love to know more about how this oddity came into being.