Good, The Bad and The Ugly, The: 50th Anniversary Special Edition (Blu-ray Review)

Sergio Leone’s masterfully-directed tale of three outlaws and their eventual showdown over a stash of hidden capital set against the backdrop of the Civil War, The Good, The Bad and The Ugly, has been consistently ranked as one of the finest westerns ever made since its initial theatrical outing in 1967. Successfully released in the U.S. by United Artists the same year as its counterparts A Fistful of Dollars and For a Few Dollars More, it was also a massive co-production between three companies with enough scope to rival Hollywood epics like Lawrence of Arabia, of which only a handful of westerns ever truly achieved.

In certain circles, labeling The Good, The Bad and The Ugly as nothing more than a “spaghetti western” is considered a dismissive act. While that style is certainly reflected, the film is a much more thought-out and important work than that, containing more layers than an onion and an artfulness almost unequaled. It’s practically a perfect film – every frame, every line of dialogue, and every last moment of it are flawless. And while both A Fistful of Dollars and For a Few Dollars More have some staying power of their own, The Good, The Bad and The Ugly is the better of the three. I’d even go so far as to call it Leone’s best-directed film, even above Once Upon a Time in the West, as potent an effort as that film is.

I am, of course, speaking about the theatrical version of the film, which is far superior to its extended counterpart. It isn’t subpar by virtue of the additional minutes added back into it, but more so because it wasn’t a version that Sergio Leone had the opportunity to approve as he had passed away long before its creation. For instance, since the film wasn’t shot with sync sound, all of the dialogue for the newly-included material had to be recorded. While Clint Eastwood and Eli Wallach agreed to supply their voices, another actor had to step in for Lee Van Cleef as he too wasn’t with us anymore. For me personally, the extra scenes add little, other than additional minutes onto an already long running time. Sometimes less is more, and in the case of The Good, The Bad and The Ugly, it was fine the way it was.

The history of the film in high definition has been problematical over the years, to say the least, beginning in 2009 with MGM’s original Blu-ray release. That transfer lacked a stylized color palette, opting instead for a more natural look. It also wasn’t particularly impressive when it came to texturing, with a touch of DNR used to smooth out some of the so-called “rougher” passages. It also contained noticeable framing issues as well. Next was its 2014 Blu-ray release, which featured a new 4K restoration carried out by L’Immagine Ritrovata (along with the other Dollars films). It corrected some of the problems from the previous release, including more accurate framing and significantly more fine detail. The bad news was that it was aggressively color-graded with a sickly yellow appearance, causing skin tones to appear brown. This version was also later included in The Man with No Name Trilogy Blu-ray set. To top things off, all of these releases featured the extended version only, which was originally released in 2004 on DVD. The true theatrical version of the film was absent from the disc-based format, seeing a 1998 DVD release from MGM that was a little difficult to come by.

For the debut of the theatrical version of the film on Blu-ray (with the extended version in tow), Kino Lorber has utilized a 4K transfer. I asked them personally for more information about it and was told that “both cuts are from a 2014 4K scan from the original camera negative done in Italy. We got it from MGM and did some minor color corrections.” So it’s safe to assume that this is the same transfer that was carried out previously by L’Immagine Ritrovata, but with significant differences. While I’d love to say that all of the stops have been pulled and we finally have the definitive home video release of the film on Blu-ray, sadly, that’s not the case. Expectations should be tempered though. This is not, in any way shape or form, a poor presentation, but it’s definitely a problematical one. Right off the bat, there are noteworthy improvements over previous releases. The strong yellow overlay has been reined in and skin tones are less brown without going pale, striking a happy medium between the two. There’s also more picture information on all edges of the frame, particularly in the top and the right, while extreme close-ups of the characters contain much more fine detail, right down to the beads of sweat and beard stubble on their faces. Buildings, landscapes, and costumes are also much sharper and clearer. Furthermore, it’s a more stable and cleaner-looking presentation than ever before as well.

The negative aspects begin with overall contrast and brightness levels, which in this case, have been dialed up to 11. Shadow detail in some of the darker shots is almost non-existent while black levels are mostly gray in appearance. There’s also some slight compression issues that pop up occasionally, usually in the more solid areas of the frame. What’s frustrating though is that it’s an uneven transfer from shot to shot. Sometimes black levels are a little more satisfying, particularly during the train ride scene with Tuco’s hat pulled down over his face. However, the most egregious error takes place in the scene wherein Blondie and Tuco are making their way across the river to the cemetery. This was always meant to be an early morning scene of sorts, I realize that, but beginning with the moment that they wake up and the moment they reach the other side, it has been aggressively color graded with much more blue pumped into it. It’s completely jarring as it doesn’t resemble anything that comes before or after it. Even more jarring is the fact that in the very next cut of Blondie and Tuco making their way up the hill, the picture returns to its normal palette. So what we have here is a bit of revisionism that’s not present in any of the previous transfers. Not only that, but it doesn’t match the rest of the scene as it plays out, nor anything else in the rest of the film.

So, what does all this mean? It means that while an effort was made to at least correct some of the problems with previous transfers, more problems were created in the interim. I must continue to stress though that it doesn’t make this transfer unsuitable. I have seen a lot worse, particularly through other companies who also specialize in Italian cinema on Blu-ray that I will not name. And again, the improvement in detail and stability is significant. Here’s a sampling of screenshots comparing the new Kino disc (the bottom image in each set) to the previous MGM disc (the top image in each set). You can see for yourself that there’s plenty of good to be had... 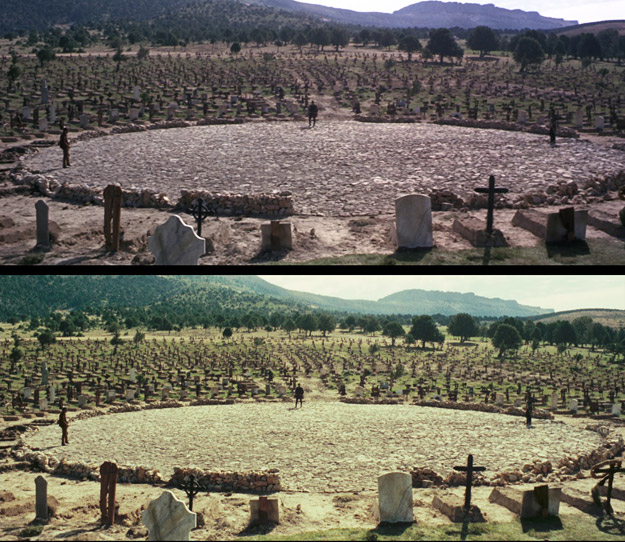 The audio for the film is actually much simpler to tackle. It contains an English 5.1 DTS-HD track, as well as English and Italian 2.0 mono DTS-HD tracks. The 5.1 mix is the same as on previous releases, which was re-engineered with a wider sound field and newly-added sound effects. I’m personally not a fan of it, but it's nice to have its inclusion for those who might prefer it (to each their own). For me, the mono tracks are the way to go. Although they’re understandably not as pristine as they contain hiss and a bit of crackle, particularly during the battle scenes when the cannons are firing, the original sound design remains intact. Dialogue is always clear throughout and synced up rather well considering. A little more restoration work could have been done here, but as is, it’s still an acceptable soundtrack leaving little room for complaint, simply because it was included. Optional subtitles in English SDH are also available if needed.

The supplemental materials are quite varied between the two discs. On Disc One, which contains the theatrical version, there’s a fantastic new audio commentary with film historian Tim Lucas, which is worth the price of this release alone. He provides a number of anecdotes, including an amusing bit of reading Tuco’s charges both times that he’s meant to be hanged. There’s also a new Trailers from Hell version of the film’s trailer with Ernest Dickerson; an alternate scene – The Optical Flip; two deleted scenes: Skeletons in the Desert and the Extended Tuco Torture Scene; The Good, The Bad and The Ugly On the Set animated still gallery; Promoting The Good, The Bad and The Ugly animated still gallery; and theatrical trailers for A Fistful of Dollars, For a Few Dollars More, The Good, The Bad and The Ugly, Once Upon a Time in the West, and A Fistful of Dynamite (aka Duck, You Sucker). On Disc Two, which contains the extended version of the film, all of the extras have been carried over from the previous MGM releases of the film. However, they were unfortunately not brought over well as they almost resemble low resolution YouTube videos. Alas, there are two audio commentaries for the film, one with cultural historian and Leone biographer Sir Christopher Frayling, and the other with film historian Richard Schickel. There’s also the Leone’s West featurette; Il Maestro: Ennio Morricone & The Good, The Bad and The Ugly (Part 1); Il Maestro: Ennio Morricone & The Good, The Bad and The Ugly (Part 2 – Audio Only); The Leone Style featurette; The Man Who Lost the Civil War featurette; the Reconstructing The Good, The Bad and The Ugly featurette; a collection of Easter eggs from the previous Special Edition DVD release (Uno, Due, Tre, Italian Lunch, New York Accent, Gun in Holster); two deleted scenes: the Extended Tuco Torture Scene (different than the one on the first disc) and The Socorro Sequence: A Reconstruction; and finally, the original French theatrical trailer.

The Good, The Bad and The Ugly is a masterpiece, that much is clear, and just having the theatrical cut of the film on Blu-ray is absolutely better than not having it at all. Is Kino Lorber’s Blu-ray the end-all, be-all release that we were all hoping for? Sadly, no, it isn’t. The film still has a ways to go as far as a definitive release, but the extras, as well as the transfer, are still worth appreciating, flaws and all.