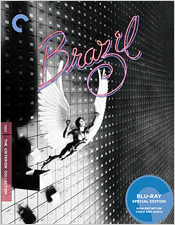 Brazil is visionary director Terry Gilliam’s retro-futurist tale of one little man’s fight against the Machine.  The film depicts an Orwellian society that doesn’t tolerate dissent or contrary thinking, so anyone who’s against the government is scooped up, tortured for information and killed... all very quickly and efficiently.  The story starts with a bug, literally, getting caught in the system and causing a typo.  It seems that the government is after someone named Archibald Tuttle, but the bug causes one of the arrest sheets to read Archibald Buttle... and you can guess what happens next to poor Mr. Buttle.  Enter Sam Lowry (Jonathan Pryce), a salaryman technocrat who discovers the error via an overcharge in government records (very nudge-nudge – the government charges those who are tortured a fee for that service).  Lowry tries to remedy Buttle’s situation, but encounters problems at every turn, until he is eventually caught so far up into the complex machination of the system, that he eventually finds himself in the torturer’s chair.  Simple and yet, along with that story description, throw in: a mother fighting the ravages of age, a series of fairy tale dreams (symbolizing the on-going story) featuring baby-faced monsters, Sam in Superman meets an angel armor and a samurai made from technological bits.  Those who know Gilliam are used to his visually visceral style; he knows how to conjure up images, and he doesn’t hold back an ounce here.  Brazil is not necessarily Gilliam’s best work, but it is his masterpiece.  That is to say, it sums him up in one work (and when you get a look into the making of the film, you see summing this man up isn’t easy).

Universal first released this film on DVD back in 1998, as a non-anamorphic, movie-only edition.  A year later, Criterion released an elaborate 3-disc edition of Brazil, that was widely hailed by critics (including ourselves here at The Bits) as one of the best DVD special editions available at the time.  The only problem with the release, was that it was issued before Criterion began using anamorphic enhancement on their widescreen releases.  Thankfully, Criterion was able to correct that oversight in 2006 and reissued the original 3-disc set exactly as it was first presented, except with a brand new high-definition transfer of the film in anamorphic widescreen, personally supervised and approved by Gilliam himself (as well as releasing a single-disc of the director’s cut under spine number 51).  And now, we have Brazil in its definitive form: Blu-ray

Disc One of the set includes a gorgeous new anamorphic 1080p transfer of the director’s 142-minute “final cut” version of the film.  The image is bright and very natural looking (a real step-up from the previous DVD release and features better color and skin tones compared to the Universal Blu release of the theatrical cut – you can really see the difference in a side-to-side comparison).  Like the anamorphic DVD, texture is excellent with strong shadow detailing.  There is moderate grain in some of the harsher toned dream sequences, but it’s not distracting and actually adds film-like quality to the image.  The audio quality is equally to the Criterion anamorphic re-release, presented in a Dolby Digital 2.0 surround mix that’s surprisingly immersive, with good low frequency.  The track has also been “restored” to remove pops, clicks, hiss and other unwanted audio defects.

Criterion took the three disc edition and compressed it into two, and if this was the “criterion” of special edition DVDs in 1998 – not much has changed.  This is still a must-own disc and showcases some of the best features ever produced for home media.   Terry Gilliam, the opinionated and ever-fun to listen to director, offers his thoughts via a commentary on the director’s cut and you should make the time to re-watch the film with him in the room.  Gilliam really likes himself and his work (as he should), and he has no problem discussing either.  There are no gaps on the track – he goes on and on.  Disc Two has everything else: the infamous 94-minute “Love Conquers All” television version of Brazil, presented full frame and featuring an alternate opening, an upbeat ending and many other changes that Gilliam himself refused to make.  It’s surprising just how different this version is.  All of this footage was shot by Gilliam, but it was edited by someone else without his supervision (at Universal’s direction), and you definitely see how editing can change things like character, tone and story.  The video and audio quality here is just okay, but it’s really only a curiosity piece anyway.  It’s more than good enough to serve its purpose for being included in the set.  The “Love Conquers All” version features an audio commentary track by historian David Morgan.  He’s not as passionate about his commentary as Gilliam, but he does shed plenty of light on this cut of the film, pointing out which scenes were alternate takes and illuminating the plot points brought up in the more definitive version (and lost here).   You’ll also find a pair of first-rate documentaries on the film – What is Brazil? (holding the rarely seen “eyeball” dream sequence) and The Battle of Brazil: A Video History, which are each as witty and brilliant as they are informative.  The Production Notebook contains featurettes covering all (and that means all) aspects of making the film.  There’s a look at the storyboards for all the dream sequences (including some that were cut from the film) entitled Dreams Unfulfilled: Unfulfilled Storyboards of Brazil, the visual design essay Designing Brazil, a look at the special effects in Flights of Fantasy – Brazil’s Special Effects, costume design (Fashion and Fascism), discussion of the script (We’re all in it Together: the Brazil Screenwriter) and score (Brazil’s Score), as well and video interviews with most every creative person behind the making of the film.  For good measure we get the film’s theatrical trailer and an essay by film critic David Sterritt in the package.  It was always a great set – and now it’s even greater on Blu-ray.

Based on ideas alone (never minding the scale), Brazil has always been one of the biggest films ever made.  It’s important not just as a film, but as historical look at film production as well.  Once you learn about all of the problems and fights it took to get the film made (or even seen), you’ll be amazed the film was even made.  Was the film too long, too deep, and too surreal, or was it perfect?  No matter what you think of it, your reaction will likely be passionate – Brazil has that kind of effect on people.  Criterion’s Brazil remains, to this day, one of the best special editions you’ll ever have the pleasure to experience, and it’s finally been updated with a state of the art Blu-ray transfer.  It’s pretty tough not to be happy about that.

Today on The Bits – Robert Altman’s #Popeye arrives on #Bluray at long last, plus a Lord of the Rings #4K update, Bill & Ted 3 & more thedigitalbits.com/columns/my-two…

RT @BillHuntBits: Coming to #Bluray from @ParamountMovies on 12/1... finally!