Barbershop 2: Back in Business (Blu-ray Review) 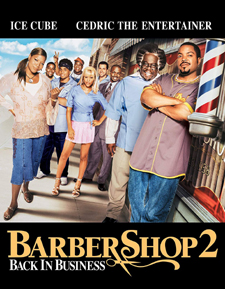 Barbershop 2: Back in Business is a return visit to the haircutting world of Calvin Palmer, Jr. (Ice Cube) and his eclectic group of barbers including Eddie (Cedric the Entertainer), Terri (Eve), Dinka (Leonard Earl Howze), Ricky (Michael Ealy), and Isaac (Troy Garity) at their community barbershop on the south side of Chicago. Calvin, who is now happy and comfortable being the owner of the barbershop founded by his father and grandfather, is now faced with more problems. Land developer Quentin Leroux (Harry Lennix) opens a rival barbershop across the street and even bribes Calvin to support the city council’s gamification legislation. In turn, Lennix’s land development plan would adversely affect the lives of homes and businesses throughout the neighborhood, not to mention Calvin and his employees.

Barbershop 2: Back in Business is a decent sequel. While much of the comedy is still on point, the film loses track due to some needless plot diversions. These include Eddie having flashbacks to when he was younger, or a subplot involving Terri and Ricky getting romantically involved with each other, leading to a love triangle between them and Dinka, who happens to be in love with Terri. Neither of these things worked with the rest of the film's story, and came across with a minimum of importance. The most notable aspect of Barbershop 2 is that it also features what is billed as a "special appearance" by Queen Latifah, which eventually led to Beauty Shop, a spin-off of the Barbershop films, a year later.

MVD Marquee Classics debuts Barbershop 2 on Blu-ray with a similar transfer to the first film. The image appears sharp and clear with a robust color palette. Everything is highly-detailed on both interior and exterior shots, although there are times when detail dips a bit, but they are few and far between. An English 5.1 DTS-HD track, as well as alternate Spanish and French 5.1 DTS-HD tracks, are provided for the audio. Dialogue and sound effects all sound well-balanced with no detectable issues. Optional English, Spanish, and French subtitles are available for this release as well.

In regards to the supplemental material, everything has been ported over from the previous MGM Special Edition DVD from 2003. Included is a video commentary featuring cast members Cedric the Entertainer, Sean Patrick Thomas, Troy Garity, and Jazsmin Lewis (which can also be toggled to audio only); another audio commentary with director Kevin Rodney Sullivan and producers Bob Teitel and George Tillman, Jr.; seven deleted scenes with optional commentary by Kevin Rodney Sullivan (Cain and Family, Japanese Cookbook, Quentin at the BBQ, Eddie vs Kenard, Calvin Ponders, Tai Chi); outtakes; 2 music videos, Not Today by Mary J. Blige featuring Eve and I Can’t Wait by Sleepy Brown featuring Outkast; a behind the scenes photo gallery, which is 35 minutes long; and trailers for other MVD titles including Barbershop, Beauty Shop, Chokeslam, Crazy Six, Out of Time, Walking Tall, and Windrider.

While Barbershop 2: Back in Business is not as good as its predecessor, it’s still entertaining. The heart and soul of these films is Ice Cube and his fellow cast members sitting around and having a good time, which is what you get with this sequel. MVD Marquee Classics has done a great job putting together a nice Blu-ray package for the film, making it an easy upgrade for fans.

RT @BillHuntBits: My goodness! Akira Kurosawa’s magnificent DERSU UZALA (1975) looks better than I’ve ever seen it on #Bluray from @Imprint…