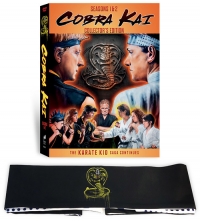 We’ve got a couple interesting bits of release news for you today...

We’ve learned that Sony Pictures Home Entertainment is releasing a Cobra Kai: Seasons 1 & 2 – Collector’s Edition DVD set on 11/12, complete with bonus scenes, gag reels, Easter eggs, and 4 featurettes (Fists & Fury: Fight Choreography, Into the Dojo: The Characters, Cast Chemistry Reads, and Exploring the Musical Identities of Cobra Kai and Miyagi-Do with Composers) as well as Musical Performances at the Whiskey a Go-Go with Guest William Zabka. And the package will include a reversible headband. You can see the cover artwork at left.

The title will also be available digitally that day, but – and this is confirmed – there is no Blu-ray release planned. (Please direct your complaints to the relevant studio via social media.) [Read on here...]

Universal is releasing the raunchy comedy Good Boys on Blu-ray and DVD on 11/12, with the Digital due on 10/19. Extras on the Blu-ray will include feature commentary with writer/director Gene Stupnitsky and producer/co-writer Lee Eisenberg, an unrated alternate ending, 11 unrated deleted and extended scenes, a gag reel, and 6 featurettes (including Boys for Real, Welcome to Vancouver, A Fine Line, Ask Your Parents, Bad Girls, and Guest Stars).

Universal (for DreamWorks Animation) will also release Abominable on Blu-ray, DVD, and 4K Ultra HD on 12/17. This isn’t officially announced yet, but comes from retail sources.

Speaking of which, European 4K retailers are showing Downton Abbey: The Movie as likely for 4K Ultra HD release at the end of the year.

And we’re still hearing that Terminator: Salvation is likely to be released by Warner Bros. on 4K Ultra HD before the end of the year, probably tied to the theatrical release of the new Terminator: Dark Fate feature film from Paramount.

Meanwhile, Lionsgate has set Marianne & Leonard: Words of Love for DVD release on 10/15 (with the Digital due 10/1), followed by Them That Follow on DVD only on 10/29.

For UK readers, Eureka! is releasing Paul Wegener and Carl Boese’s classic silent horror film Der Golem (1920) on Blu-ray as part of their Masters of Cinema series on November 18th. This is restored from a new 4K scan of the original film negatives, with the original German intertitles (with optional English subtitles), your choice of three scores, new audio commentary, new essays, the US version of the film and more.

Indie Pix is releasing Veronica Kedar’s Family on DVD and Digital on 10/8.

And RLJE Films will release A Score to Settle on Blu-ray and DVD on 9/24.

In theatrical news, Warner Bros. is bringing The Shawshank Redemption back to theaters on 9/22, 9/24, and 9/25 in honor of the film’s 25th anniversary. We don’t yet know if there’s a 4K UHD planned.

And finally, we’d like to take a moment to acknowledge the passing of 80s music legends Ric Ocasek (of the new wave band The Cars) and Eddie Money over the weekend. You can read more on their lives and passing here and here. Both will be missed.