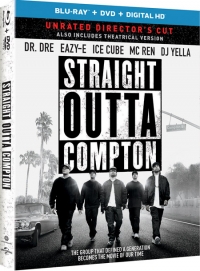 Our own Michael Coate kicks things off today here at The Bits with a brand new History, Legacy & Showmanship column here at The Digital Bits, this one featuring a great look back at the James Bond film GoldenEye on the 20th anniversary of its original release. The piece includes a great roundtable interview of film historian experts, including Robert A. Caplen, James Chapman, John Cork, Bill Desowitz, Lisa Funnell, Mark O’Connell, Lee Pfeiffer, and Bruce Scivally. Don’t miss it!  [Read on here…]

In announcement news today, Universal Studios Home Entertainment has set the Straight Outta Compton: Unrated Director’s Cut for release on Blu-ray and DVD on 1/19/15, with the digital release set for 1/5. Extras on both disc versions will include audio commentary with director/producer F. Gary Gray and 5 featurettes (N.W.A. The Origins, Impact, Director’s Journey, The Streets: Filming in Compton, and N.W.A. Performs in Detroit). To this, the Blu-ray will add deleted scenes, a never-before-seen performance, and the Becoming N.W.A. featurette.

And finally today, I had the pleasure yesterday of attending the opening day for Disney’s Season of the Force at Disneyland in Anaheim, California. It’s essentially a makeover of Tomorrowland in honor of the upcoming Star Wars: The Force Awakens. It features a new Star Wars Launch Bay exhibit of props and models, an updated Star Tours adventure (featuring a world from the new film), an upgraded and Star Wars-themed “Hyperspace” Mountain, and a Path of the Jedi short film (replacing Captain EO). Several of our friends from Team Axanar were on hand for the day, as was Blu-ray producer Charles de Lauzirika who, along with the great creative team at Lucasfilm and Disney, produced a terrific short video (on the past, present, and future of the Star Wars franchise) that you can watch when you visit the Launch Bay. The updates are pretty great and no small amount of fun, so I highly recommend that you all visit and check them out if you can. Meanwhile, I thought you might enjoy seeing some pictures from the day. Here you go...

Back tomorrow with more. Stay tuned...