Fire in the Sky (Blu-ray Review) 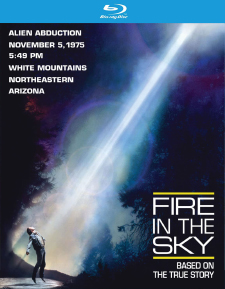 Fire in the Sky was a box office disappointment when it was released in 1993, but it quickly became a minor cult classic on home video, where the intensity of its abduction scenes scarred many viewers for life. That’s a trifle ironic, since the film was ostensibly based on the book The Walton Experience by Travis Walton, which purported to tell the true story of his abduction by aliens in 1975. However, the details of his experience weren’t necessarily dramatic enough to please the producers, so director Robert Lieberman and screenwriter Tracy Torme jazzed things up considerably. That’s an understatement, since they actually made up a completely different version of events that had little to do with what Walton had described in his book.

The broad outlines of the story are there: on November 5, 1975, Walton and a group of loggers went to work in the Apache–Sitgreaves National Forests near Snowflake, Arizona, where they encountered a UFO, and Walton was abducted. When the rest of the gang returned without him, they were immediately suspected of foul play, so the police started an investigation. After Walton mysteriously re-appeared five days later, those suspicions immediately changed to accusations that the whole thing was a hoax.

The Devil’s in the details, however, and that’s where Fire in the Sky diverged widely from Walton’s account. His version of what happened on board the alien spacecraft wasn’t too dissimilar from other stories of alien encounters—interestingly, it strongly echoed the events in the television movie The UFO Incident, which had aired just two weeks previously. That was judged too mundane for the film, so Lieberman and an army of technicians conjured up a wild fever dream of an abduction scene that’s borderline surrealistic. The intent was to create something so unfamiliar that it felt truly alien to human experience, and in that respect, the sequence is a success. The staging of some of the shots doubtless provided an inspiration for the Wachowskis when they created Neo’s rebirth for The Matrix (and considering that both films shared a cinematographer, that can’t be a coincidence).

The always likable D.B. Sweeney is credible as Walton, and he’s surrounded by a fine group of actors including Robert Patrick, Peter Berg, Henry Thomas, Bradley Gregg, and Craig Sheffer. Unfortunately, their characters are far too thinly sketched to give them any significant way to distinguish themselves. Kathleen Wilhoite is largely wasted as Patrick’s wife, though Noble Willingham and James Garner fare a bit better as the law enforcement officials in charge of the investigation. In the end, Fire in the Sky’s intense abduction scenes are its biggest claim to fame, and they’re the main reason why the film is remembered to this day.

There’s a central paradox inherent in all of that, however. Fire in the Sky is based on a true story, but it doesn’t relate Walton’s version of events in a truthful fashion. Yet his story also might not be the truth, so the film may well be a fabrication of a fabrication. There are layers of irony involved here, but they don’t appear to be intentional on the part of the filmmakers. If Fire in the Sky had been a conscious attempt to interrogate the nature of truth vs. fiction, it might have had a bit more depth than it does. Still, there’s no denying the fact that the harrowing abduction scenes are quite effective, and as claims to fame go, that’s not a bad way to be memorialized.

Cinematographer Bill Pope shot Fire in the Sky on 35 mm film in the Super-35 format, using Panavision cameras with spherical lenses, framed at 2.39:1 for its theatrical release. The transfer in this Blu-ray edition is taken from a 4K scan of the original camera negative provided by Paramount, and it’s a thing of beauty. The image is extremely sharp, detailed, and free of any signs of damage. Facial textures, clothing, and environmental details are all well-defined. The grain is subdued, but not erased, and it varies a bit naturally during any optical work. The color balance looks accurate, the contrast range is strong, and the black levels are suitably deep. Short of 4K Ultra HD release, it’s difficult to imagine Fire in the Sky looking much better than it does here.

Audio is offered in English 5.1 and 2.0 DTS-HD Master Audio, with optional English subtitles. Fire in the Sky was released theatrically in Dolby Stereo, and so the 2.0 track is a four-channel mix matrixed into two. The 5.1 track appears to be a straightforward discrete encoding of those four channels, so the differences between the two are minimal. The channel separation is probably a bit better in the 5.1 track, but you can’t go wrong with either version. Regardless of which one you choose, the mix is focused on the front channels, with limited ambient effects in the surrounds, and just an occasional directionalized effect steered into them. The overall fidelity is strong, though deep bass is somewhat limited. There’s plenty of dynamic impact during the abduction scenes, with frequent loud audio stingers designed to create cheap jump scares. Mark Isham’s bombastic electronic score also isn’t particularly subtle, but it’s still effective.

Shout! Factory’s Blu-ray release of Fire in the Sky includes the following extras, most of which were produced by Daniel Griffith’s Ballyhoo Motion Pictures, and are offered in HD:

The title card for Cinematic Abduction identifies it as a “select scene commentary,” and it was derived from the commentary track with Robert Lieberman that was recorded for the 2020 Via Vision Imprint Collection release. He provides an overview of the development of the film, as well as various stories about its production. He also spends some time describing the complicated practical effects work that was accomplished for the project. In Touched by Light, D.B. Sweeney explains that he saw working on Fire in the Sky as a way of demonstrating his comfort level doing wire work, since he was hoping to audition for James Cameron’s unrealized Spider-Man film. (His comfort level wasn’t as high as he thought that it was, since he was too claustrophobic to handle one of Fire in the Sky’s most iconic shots.) He openly admits that he wasn’t happy with the way that the ending was handled. We Gotta Go Back features Robert Patrick talking about where he was at personally at that point of his career, and how he intuitively understood the characters in the script. He also relates some of his experiences with the rest of the cast, especially James Garner, who acted as a mentor for him. In Borrowed Time, Mark Isham describes how he became involved with the production, and why the film appealed to him. He explains how he built a sample library to create the film’s unique soundscapes. Finally, the Photo Gallery includes various production stills, as well as the theatrical poster artwork.

Missing from the 2020 Via Vision release is the full audio commentary with Lieberman, as well as the featurette Fear from Above: The Practical Effects of Fire in the Sky. That version also included a slipcover. The flip side is that Via Vision only had access to an older master from Paramount, so while the incomplete extras package that Shout! Factory offers may be disappointing, the outstanding new 4K transfer still gives them the clear edge between the two. It’s a substantial upgrade over all previous home video releases. Fire in the Sky may not make you believe in alien abductions, but this disc will make anyone believe in the power of a quality 4K master, even on 1080p Blu-ray.