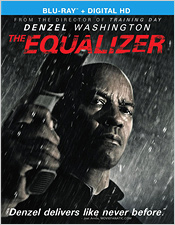 The original 80s television show, The Equalizer, focused on an ex-government spook who has since retired and now spends his time fighting for those with no one to fight for them. In this loosely adapted iteration, Denzel Washington takes over for Edward Woodward as the man with the shadowy past. Washington plays Robert McCall – an associate at a Home Depot-like store who showcases OCD tendencies (he likes to time things like brushing his teeth, how long it takes to wash his single-serving dinnerware, etc.) and a very strict sleeping schedule that allows for late night book reading at the local diner. It’s at the diner McCall meets child prostitute Alina (Chloë Grace Moretz), who has shown a bit too munch spunk for her Russian mobster handlers and gets slapped around hard enough to land in the hospital. McCall doesn’t take too kindly to this turn and decides to take $9,800.00 of his savings to her pimp and offers to buy her contract. This doesn’t go as well as planned and McCall shows us just what he’s made of when he kills every last member of the gang sitting in that room, all without the use of a gun (we come to find he has a strict no gun policy). Unbeknownst to McCall, this sets a shadowy devil by the name of Teddy in motion and Teddy’s as focused and as good at what he does as McCall is.

The Equalizer is just a good old-fashioned action film with just the right amount of Washington-styled character building to make it that much more engaging. It also includes a surprising amount of gruesome violence, so if you’re into that – here you go. It’s not a perfect film by a long shot, but it’s actually quite charming and vastly watchable, even through most of the cliché. The actors Washington supports himself with really up the game. Marton Csokas as Teddy, the villain, is great as is the always delightful Moretz. Look for Melissa Leo and Bill Pullman in kinda/sorta cameos and a nice “heavy” turn by up-and-coming character actor David Harbour.

On Blu-ray, Equalizer really shines. The image is very detailed with strong colors and well-represented black levels. Shadow detail and skin tones are also very nice. The film looks great. Sound is presented in an English 7.1 DTS-HD Master Audio and it’s very playful. Dialogue is well-represented in the front center with fun, immersive sound all around. Also on-board are Dolby Digital 5.1 French and Spanish tracks, as well as an English Descriptive Audio track in English Dolby Digital 5.1. Subs are provided in English, English SDH, French, and Spanish.

In terms of the extras, let’s get the easily accessible ones out of the way. First up are the autoplay trailers for Fury, No Good Deed, Foxcatcher, When the Game Stands Tall, Predestination, and the PSN series Powers. No comment, trailers be trailers. Next are the featurettes: First there is Inside The Equalizer, a featurette heavy on the EPK-style, which looks at how the film came to be, how awesome Denzel is and how there may be more of these films – the movie was always planned to be part of a franchise – a first for Denzel. It includes comments from screenwriter Richard Wenk, producer Jason Blumenthal, producer Todd Black, director Antoine Fuqua, and star Denzel Washington. We then look at Denzel Washington: A Different Kind of Superhero where everyone takes turn waxing Denzel’s car, so to speak. Children of the Night focuses on Chloë Grace Moretz and discusses her character with lots of comments from the crew about how awesome she is. She closes the featurette with info about the organization Children of the Night that works to end childhood prostitution. Equalizer Vision: Antoine Fuqua talks with the cast and crew about the brilliance that is Antoine Fuqua. One Man Army: Training and Fighting showcases the fight training Denzel went through, how Denzel came up with the no gun policy and confirms that Denzel used no doubles in his fights. You’ll also find a Photo Gallery and a goofy fake commercial for the Home Depot-like store McCall works at entitled Home Mart: Taking Care of Business One Bolt at a Time. Finally, running along with the film is the optional Vengeance Mode with Denzel Washington & Antoine Fuqua. It works out to be about twenty-five minutes of content accessible only when watching the film, where Denzel and Fuqua cut in and discuss scenes from the film with behind-the-scenes footage. You can actually just watch the cutaways by navigating through chapter stops while the film is going. It’s not groundbreaking info, but some of it’s interesting.

The Equalizer is a pretty entertaining film. I love when Denzel goes all vengeance in his movies – Man On Fire is one of my favorites. I’d hate to see what this film would have become without his input, because it really does seem like having him onboard made this an absolutely better film. If you’re looking for a good action yarn, pop this one in.