All right, we're getting settled into the new site nicely. The old site has been archived for your browsing pleasure - just look in the menu under FEATURES for THE ORIGINAL BITS. Also, those of you who enjoy Russell Hammond's weekly Release Dates & Artwork update can now find it in its new location here at the site - just click the RELEASE DATES option in the menu above. More updates are coming so keep checking back.

Here at the site today, we're pleased as punch to offer you the next in Jahnke's Hell Plaza Oktoberfest 666 line-up of reviews: a look at Lionsgate's Cabin in the Woods on Blu-ray. Enjoy!

In release news this morning, we've got a few more details for you on Warner Home Video's 3-disc Blu-ray/DVD Combo release of The Dark Knight Rises due on 12/4 (SRP $35.99). Extras will include the Batmobile documentary, the feature-length multi-part Ending the Knight documentary (includes The Prologue: High Altitude Hijacking, Beneath Gotham, Return to the Batcave, Batman vs. Bane, The Bat, Armory Accepted, Gameday Destruction, Demolishing a City Street, The Pit, The Chant, The War on Wall Street, Race to the Reactor, The Journey of Bruce Wayne and Gotham's Reckoning), 2 character featurettes (A Girl's Gotta Eat and Shadows & Light in Large Format), The End of a Legend, trailers and a gallery of artwork.

Warner Home Video has also officially set The Notebook: Ultimate Collector's Edition Gift Set to arrive on Blu-ray/DVD Combo on 1/15 (SRP $49.99). In addition to Blu-ray, DVD and UltraViolet digital versions of the film, you'll also get exclusive swag including a collectible golden locket, a set of postcards with scenes from the film and a "vintage leather-style blank journal with gold edging and ribbon marker; pages designed with watermarked letters and images from the film". So there you go.

Not to be outdone, Disney has revealed that the Peter Pan: Diamond Edition will soon be released on Blu-ray/DVD Combo and DVD. No street date is yet available, but retailer materials reveal a Spring 2013 release and sources are telling us to expect the street date to be sometime in February.

Sony has also announced more new MOD DVD titles for release on 11/6, including Caught, The Vertical Ray of the Sun, The Endurance, Camp on Blood Island, Don't Panic Chaps, All Ashore, The Boogieman Will Get You, Men Without Law, Hannah's Law and Breaking In: The Complete Series.

Anchor Bay and The Weinstein Company have Lawless coming on Blu-ray and DVD on 11/27 (SRP $39.99 and $29.98). Extras will include audio commentary with director John Hillcoat and author Matt Bondurant, 2 featurettes (The True Story of the Wettest County in the World and Franklin County, VA: Then and Now), Willie Nelson's Midnight Run music video and deleted scenes.

And WWE Studios and Anchor Bay will release the horror film The Day on Blu-ray/DVD Combo and DVD on 11/17 (SRP $29.99 and $26.98). Extras will include audio commentary with executive producer/director Doug Aarniokoski, producer Guy A. Danella and writer Luke Passmore.

Also today, a lot of fans have asked us about the differences between Fox's 2-disc Prometheus Blu-ray/DVD Combo ($39.99 - Blu-ray, DVD and Digital Copy) and the Prometheus 4 Disc Collector's Edition (SRP $49.99 - Blu-ray 3D, Blu-ray, DVD and Digital Copy). The 4-disc edition includes the movie in Blu-ray 3D, the movie in 2D (with commentary by director/producer Ridley Scott and a second commentary by writer Jon Spaihts and writer/executive producer Damon Lindelof, The Peter Weyland Files, deleted and alternate scenes and the Weyland Corp Archive Second Screen with app functionality), a third Blu-ray of extras (including the The Furious Gods: Making Prometheus documentary, scores of Enhancement Pods, more Weyland Corp Archive, Pre-Viz material and screen tests) and finally the DVD/Digital Copy disc. Here's the key - the 2-disc set includes only the 2D movie disc and the DVD/Digital Copy disc. You don't get the bonus disc of supplements. So if you want absolutely everything, you have to get the 4-disc set. Both versions street next week on 10/9. Just so you know.

In other news today, we highly recommend that you Trekkers check out this radio story from KPCC's Off Ramp program - it's a feature on CBS' Star Trek: The Next Generation Blu-ray remastering effort. And you'll definitely want to stick with it right to the end, because for the first time in public (to our knowledge) there's the suggestion made that - provided demand is there and the TNG Blu-rays all sell well - CBS may continue their BD remastering/upgrade effort on to Star Trek: Deep Space Nine! Cool news indeed. This jives with what we've been hearing from our own industry sources. Keep your fingers crossed.

Also today, any fans of the raunchy 80's comedy Porky's? Bits reader Doc D. tells us that Walmart currently has an exclusive BD version in stores.

Finally, we'd like to take a moment to acknowledge the passing of actor Herbert Lom, who died last week at the age of 95. You'll best know him as Inspector Dreyfus from the Pink Panther series.

Here's a look at the Blu-ray artwork for Warner's The Dark Knight Rises and The Dark Knight Trilogy Limited Edition Blu-ray Giftset, as well as Disney's art for the Peter Pan: Diamond Edition (TBA)... 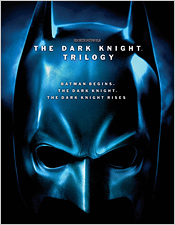 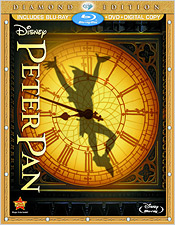